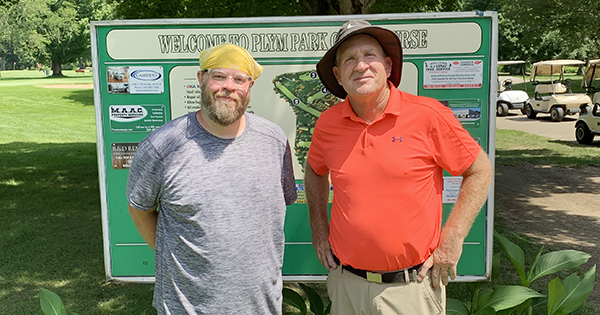 After shooting an opening-round 73, Van Dyke fended off runner-up John Kessick and Larry Larson to win his first championship.

Kessick trailed Van Dyke by one stroke heading into the second round, while Larson was six shots back. Three-time defending champion Dave Berger and Scott Zavitz started the final 18 holes on Sunday three shots back.

Van Dyke’s two-day total of 151 was a stroke better than Kessick’s 152. Larson finished with a 153, while Berger shot 154. Scott Zavitz rounded out the top five with a 155 after shooting 76 on Sunday.

Van Dyke said he has been playing in the city tournament for almost a decade, but took a few years off. This was his fifth attempt at winning the Championship Flight.

“I tied once in A Flight, losing in a playoff,” he said.

Van Dyke had an eight-foot par putt save on the opening hole, which helped set the tone for the rest of the day.

“I made a couple of long putts for par saves and that kind of keeps you going,” he said.

Van Dyke has played before with Berger and knew he would be a tough competitor on Sunday.

“I played with Dave one other time, and he is a really good player,” he said. “I don’t think he played his best today. I have also played with Scott before and with John before. It was a good group to play with.”

In what was the most competitive flight of the Niles City Golf Tournament, Ryan Head edged Brett Scott in a playoff on Sunday to win the A Flight title.

Dave Hinegardner, who would wind up third, shot 79 in Saturday’s opening round. Five players, including Head and Tony Gaideski, who would tie Hinegardner for third in regulation, but lost in a playoff, for second place heading into Sunday after they all shot 84.

On Sunday, Head shot 80 and Scott 83 to finish regulation tied at 167. Hinegardner and Gaideski both finished at 169.

Head had a bogey on the first playoff hole to win the flight championship. Hinegardner defeated Gaideski in a playoff for third place.

Head won the B Flight championship in 2014. He has been chasing the A Flight title ever since.

“I felt comfortable the entire day,” Head said. “I wasn’t feeling any pressure being five strokes down from the beginning of the day.”

Head had caught Scott by the time the two made the turn and headed to the 10th tee.

“I was trying to play steady golf on the way in,” Head said. “I was trying to make pars. I struggled on the last hole. I took a seven on 18, which was the worst hole I had all day, but I wasn’t under any pressure. We ended up tying, and I won it on the first playoff hole.”

Rounding out the top five was Will Townsley, who shot 171.

The B Flight championship was also decided in a playoff as Eythan Bradley edged Dan Balos.

The pair shot 161 in regulation. Balos had a two-stroke lead following Saturday’s round as he shot 78 and Bradley 80.

Rounding out the top five were Jason Flewelling and Chuck Ditto, both of whom shot 168.

Austin Bertschy was a first-time winning as he captured the C Flight crown by defeating Cody Durham by a stroke.

“Last year, I think I finished fifth,” Bertschy said, who has been playing in the tournament for four years.

Bertschy said that No. 1 played a key role in the tournament for him as he was able to par it all four rounds.

“On the first day, I started one-under through the first four,” Bertschy said. “I had a birdie on No. 4. I had a 15-foot birdie I sunk, which was pretty big. I needed every stroke, as I only won by one stroke.”

NILES — An area resident is headed to prison on drunk driving charges after being sentenced Monday in Berrien County... read more