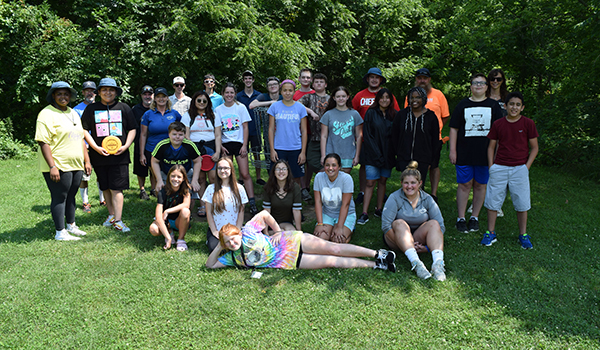 Nineteen students explored nature careers and learned how health and wellness are tied to success by traveling the width of the Michigan mitten, from Lake Michigan dunes at Saugatuck to kayaking in Detroit.

Sandwiched in between were more localized excursions, from the Mattawan fish hatchery and Dr. T.K. Lawless International Dark Sky Park near Vandalia to learning disc golf, which exploded in popularity during the pandemic.

“They met the fisheries biologist and technician,” Kulka said.

“He shared his story with students on how he fell in love with the stars,” Outreach Advisor Allyson Harris said. “He was 8 years old when he received his first telescope for Christmas. Students learned about basic astronomy and light pollution concepts. It was a bummer we were unable to stargaze (due to rain), but overall students learned some amazing information.”

“Discs fly differently,” Sawyer said. “I can’t throw a Frisbee to save my life, but I can throw this 350 feet.”

Kulka, who favors a forehand release, learned to play while a Ferris student in 2008. Disc golfers speak in lingo, such as “hyzer,” an angled throw designed to curve opposite the throwing arm — left for a right-handed player, right for a southpaw.

There is a Professional Disc Golf Association (PDGA), boasting more than 120,000 lifetime members in 54 countries, and a Michigan Hall of Fame with 23 inductions since 2015.

The PDGA is the governing body, sanctioning competitive events for players of every skill level. There are more than 8,000 disc golf courses worldwide since the first in California in 1975, with more installed every day, including SMC’s Dowagiac campus, Lawless Park and Madeline Bertrand County Park near Niles.

Originally played with Wham-O Frisbees, patented in 1966, the game has evolved to flight-rated discs specialized for “driving” to “putting.” Players pull bags containing a colorful array of flat, round “clubs” and a marker to jot contact information on discs because errant shots get lost.

As shade-seeking missiles whistle through the tree canopy at chain-mesh baskets, campers also used a phone app to snap pictures of wildflowers and plants posted to an online community which helps identify their finds.

Wilson, 65, turned his hobby into a disc golf business and coached high school sports and Little League baseball while watching it develop over the past 35 years. He also plays “ball golf.”

Medina graduated with Dowagiac Union High School’s Class of 2021 and is taking five classes at SMC while living on campus in William White Hall. His eventual goal is social work, transferring from SMC to Grand Valley State University, Michigan State University or Ferris.

“Our disc golf group had fun. We cheered for each other,” Medina said. “I got tired hiking (4.5 miles) on Monday. On the dune buggy ride, the kids said, ‘You’re supposed to be a leader,’ so they made me run down the sandy hill. I kept falling, then I had to get back up the hill.”

ETS is a federally-funded TRiO program committed to ensuring the academic and personal success of eligible middle and high school students. ETS advocates for completion of high school and advancement to college and/or post-secondary training.