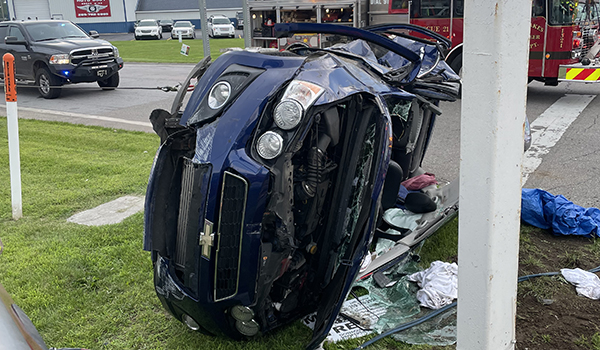 SILVER CREEK TOWNSHIP — Three were injured in a collision in Silver Creek Township Saturday, according to the Cass County Sheriff’s Office.

Sheriff Richard Behnke of the Cass County Sheriff’s Office reported that his office responded to a two-vehicle crash at the intersection of M-51 and M-152 in Silver Creek Township. The crash occurred at approximately 5:32 p.m. Saturday.

Initial investigation shows that the driver of the Chevy Sonic, driven by Christina Gindelberger, 39 of Dowagiac, was headed eastbound on M-152 when she pulled out in front of the Ford pickup truck headed southbound on M-51. The driver of the Ford pickup truck was William Strand, 51, of Gobles, Michigan. He was unable to stop and collided with the side of Gindelberger’s vehicle, sending them both off the roadway.

Gindelberger and her 15-year-old son were taken to the Borgess Hospital in Kalamazoo for their injuries by Pride care ambulance service.

A passenger in the vehicle with Strand, Charlotte Valentine, 71, of Gobles, was transported to Borgess Lee Memorial in Dowagiac for her injuries by the Marcellus Ambulance service. Everyone involved was wearing their seatbelts at the time of the crash.