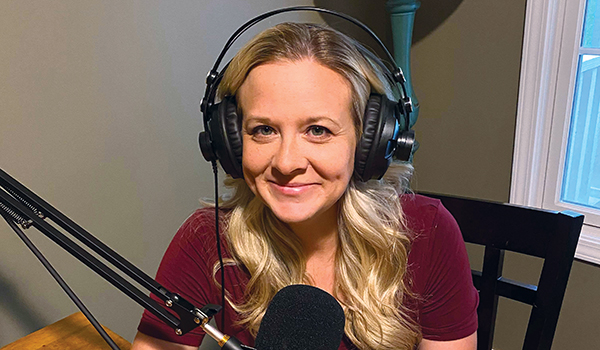 BUCHANAN — When other girls her age were listening to New Kids on the Block and Mariah Carey, a young Stacey Martin could be found eating up syndicated episodes of “A Prairie Home Companion.”

Broadcast on Minnesota Public Radio, Garrison Keeler narrated tales of a fictional small town in Minnesota, with fictional characters and fictional news — all of which seemed very real to Martin, who lived in a small town much like Keeler’s Lake Wobegon.

This, coupled with memories of her grandfather’s South Bend Tribune column “The Dodson Farm,” built a lifelong love of sharing stories of her friends and neighbors. Martin hopes her latest venture gives listeners the same sense of nostalgia they felt when consuming the stories she grew up on.

“The new podcast is called ‘The Folks Back Home,’” Martin said. “It is focused on my hometown of Buchanan and essentially telling the stories of the amazing people who live here, grew up and continue to give back here.”

The interview format podcast is released each Tuesday and features current and former Buchanan residents sharing stories about their time in the city that Reader’s Digest dubbed “The Nicest Place in America” in 2020.

Martin previously cohosted a podcast called ‘Hustlin’ in Heels,” which featured women in business from throughout southwest Michigan. After recently giving birth to her fourth child and leaving her marketing job at Honor Credit Union to spend more time with her family, Martin saw an opportunity to dive back into the growing podcast medium, this time focusing entirely on Buchanan.

“It’s where I grew up. It’s a special place that has a special story to tell,” Martin said.

“These are just small-town people, but you would be amazed in how interested others are about hearing about them, because what they talk about brings back memories from what they’re talking about,” Martin said. “Even if you’re not form Buchanan, you can connect with small town life — kind of trying to find those common themes about small time life that can connect people, those stories of nostalgia and hope.”

Martin said she has already seen a wide audience of listeners tuning in from Buchanan and beyond, with more than 1,500 downloads in two months.

“I hear from people in California and Florida and all over the United States,” she said. “They say, ‘thanks for letting us now about what’s going on back home.’”

Future guests on the podcast include Mark Nixon, Dr. White, Jeanne Harris and the Scarecrow Ladies, among others.

Those interested in listening can download “The Folks Back Home” anywhere podcasts are downloaded, including Apple Podcast, Spotify and Google Podcast. Martin also posts the podcast to her website, thefolksbackhome.com, and shares the episodes on social media and a weekly email newsletter.

As the podcast continues to grow, Martin said she hopes listeners can connect to the nostalgia and feel-good stories in the same way she did to “The Dodson Farm” and “A Prairie Home Companion.”

“There’s so much negativity out there,” she said. “I wanted to have an hour a week where folks can find it inspiring and exciting and hopefully funny at times.”

HOWARD TOWNSHIP — A hit-and-run suspect has been apprehended after an incident near Barron Lake Thursday, according to the Cass... read more