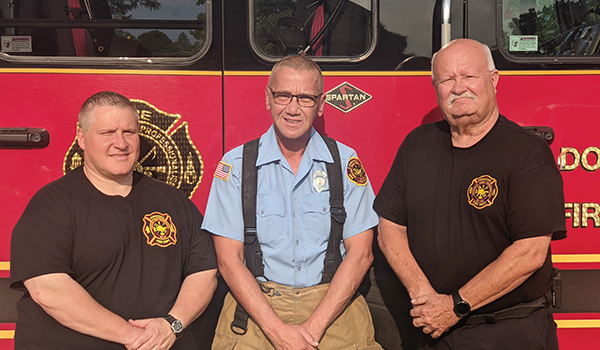 DOWAGIAC — At a celebration hosted this week in downtown Dowagiac, Burt Dodd was the man of the hour.

“You’ve been here for 30 years, which is quite remarkable,” Smith said. “We just wanted to recognize that and thank you for your years of service.”

“We appreciate everything he’s done,” Grinnewald said. “You’ve been a fixture here before I came, and he’s still here. There’s nobody here that’s more dedicated and you can always be counted on and trusted. We’re glad to have you.”

Smith and Grinnewald presented Dodd with a framed certificate of achievement and a congratulatory cake, which was well-received by Dodd and his fellow firefighters.

The celebration was an honor for Dodd, who comes from a family of firefighters. His late father, Terry, and uncle, Jim, were both longtime firefighters in the area. Just like his father and uncle had done before him, Dodd earned a Firefighter of The Year award in 2003.

“I followed in my dad’s footsteps,” Dodd said. “He was a firefighter for 35 years. I grew up around [firefighters] and wanted to be like my dad was, and here I am.”

Dodd was happy to celebrate his special moment with a crew he has shed blood, sweat and tears with over the years.

“I love every minute of it,” he said. “I love being around these guys. They’re a great bunch of people. You can’t do any better than this.”

With his 30th anniversary milestone achieved, Dodd does not plan on hanging up his gear any time soon but he does have an endgame in mind. A poetic one, at that.

“I’m gonna try to make it as long as my dad was on, so 35 years,” he said. “I had never dreamed of being this far along. It’s been an adventure over the years, for sure.”

In other public safety news, members of the Dowagiac Police Department braved the icy dunk tank waters for a cause last weekend as part of Dowagiac’s Summer in The City festival.

The department’s Dunk-A-Cop booth offered festival-goers the opportunity to drop members of the police department into a dunk tank donated by the Niles Fraternal Order of Police.

“It was a really good turnout,” said DPSD administrative assistant Michell Outlaw. “It didn’t cost us anything to rent it, and it was all on volunteer time.”

DOWAGIAC — A project years in the making is finally getting underway. Members of both the Dowagiac Rotary Club and... read more