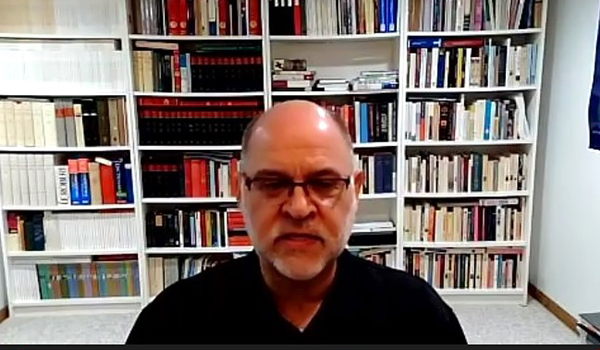 NILES – The men in black Western Michigan University professor Jose Antonio Brandao spoke about last week Wednesday night were not the ones most people think of. Brandao reported on his research of the Jesuits who lived at Fort St. Joseph in the 17th and 18th centuries, not secret government agents.

Brandao’s lecture was the second in this year’s Fort St. Joseph Lecture Series. The theme for the lecture series as well as the Aug. 7-8 open house at the fort site is “People of the Post.’ The lectures are hosted by the Niles District Library and are being held virtually via Zoom. They will continue the next two Wednesdays of July at 7 p.m.

Brandao has been active in the Fort St. Joseph archaeology project since its inception in 1998 and is the project’s consulting historian. He is a professor of history at Western Michigan and the author of several books and many articles about the history of New France that covered what is present day Michigan and Canadian provinces.

The history of the Jesuits in New France has been the subject of much of his research over the years, aided immeasurably by his participation in the Fort St. Joseph work. His most recent article on the Jesuits was co-authored this spring by Fort St. Joseph lead investigator Michael Nassaney and published in the Journal of Jesuit Studies.

As he told the three dozen people listening in to Wednesday’s lecture, the Jesuits were among the first Europeans to visit this area. They came in the late 1600s as missionaries to the French fur traders and native residents and were here until well into the 1700s. By 1761, as many as 320 Jesuit priests had come to the new world.

Brandao said his research focused primarily on the documentary record left by the Jesuits who worked and traveled through the Great Lakes including baptismal and other records. “It’s pretty clear that the Jesuits produced native conversions and ministered to the French and French-Canadians at the fort,” he said.

“The natives called them black robes,” he added. “They were quite a shock to the Indians in how they dressed and looked. They didn’t look like other Frenchmen. They were interested in religion not furs.”

Brandao said the Jesuit approach was to live within native communities and learn their languages. “They focused on teaching the tenets of their faith,” he said. “They didn’t interfere with native practices as long as they were following the tenets and praying properly. For natives, Catholicism was a way to understand the world that had changed around them.”

In 1721, records show that a priest visited the area and stated that he visited the post where there was a mission and baptismal records from the fort indicated the existence of a chapel in the 1720s. By the 1750s, another priest visited the fort and mentioned being received at the priest’s house.

Brandao also touched upon the artifacts found during the archaeological work at the fort. They include crosses, coins and a cilice which had small spikes which people wore in penance and to imitate the sufferings of Christ. Until recently when one was found in Maryland, the cilice found at the Fort St. Joseph site was the only one found in North America.

Upcoming lectures are July 21 and July 28. Robert Myers, the director of education at the Historical Society of Michigan will present “He will never do in that command” about Ensign Francis Schlosser on July 21. People will remember Myers from his many years at the 1839 Courthouse Museum in Berrien Springs.

Loraine DiCerbo, the editor of habitant heritage for the French Canadian Heritage Society, will speak on July 28. Her topic will be “A Retrospective of the Chevalier Family, Their Roles and Relationships at Fort St. Joseph: 1730-1780.”