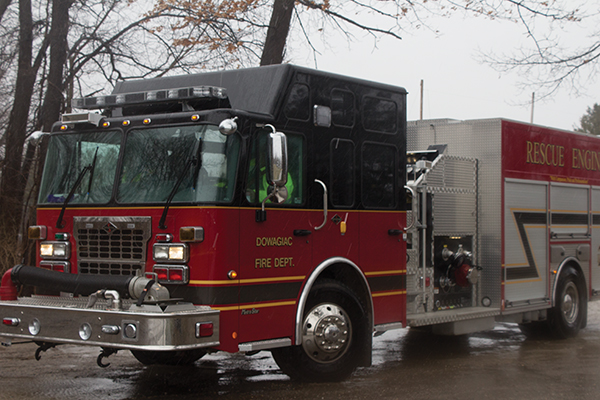 DOWAGIAC — No one was injured in a structure fire in the city of Dowagiac Saturday night, according to the Dowagiac Fire Department.

The Dowagiac and Wayne Township Fire Departments were dispatched to a structure fire at Parkside Apartments, 420 E. Railroad, Dowagiac at approximately 7:38 p.m. on Saturday, July 17.

According to a news release from the DFD, the first arriving Dowagiac engine was on the scene within four minutes and reported a working fire in a one-story duplex building. Initial reports from neighbors indicated no one was home in the affected apartment and that the occupant of the adjoining apartment had already exited that unit.

Fire crews worked quickly to enter the building and extinguish the fire and confirmed that there were no occupants in either apartment. The fire was declared under control at 7:58 p.m.

Wayne Township fire fighters assisted with salvage and overhaul efforts and utilities to both apartments were disconnected.

The Pokagon Fire Department was requested to standby in the area for other calls.

The fire damage was confined to the kitchen of apartment No. 12 but the entire apartment suffered heat and smoke damage. The adjoining apartment did have some smoke damage due to a common attic.

before the fire was reported. According to the release, she is not aware of any activity that would have led to the origin of the fire and did not have renter insurance. The fire is currently determined to be accidental pending further investigation.

The American Red Cross was contacted and is assisting the family. Also assisting at the scene were the  Dowagiac Police, SEMCO Gas and Dowagiac Utilities.