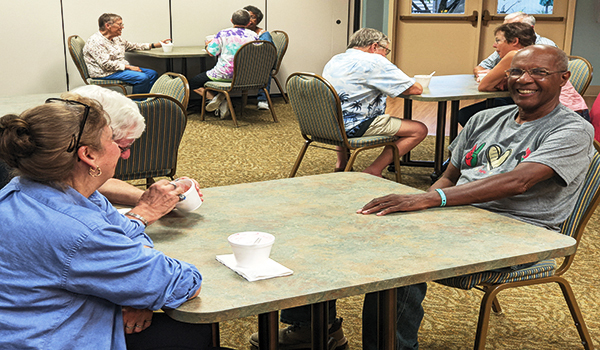 CASSOPOLIS — Smiles and laughter abounded at the Cass County Council on Aging Friday.

Was it the five different flavors of ice cream being eaten by guests? Was it friends shooting the breeze face-to-face after more than a year apart? Was it both?

What can be said is that the COA’s annual Ice Cream Social was enjoyed by the more than two-dozen guests in attendance.

“We’ve been doing this for years,” said COA Leisure Enrichment Director Sandi Hoger. “We’re so excited to be back and see everyone having a good time.”

The free event, which took place from 7:30 to 8:30 p.m., offered people of all ages the opportunity to socialize and eat generous portions of ice cream. Participants could choose from flavors including berry swirl, pecan praline, chocolate and vanilla, with toppings like strawberry syrup, sprinkles, nuts and whipped cream also available.

The event was followed by Family Movie Night at 9 p.m., featuring the adventure comedy “Jumanji: The Next Level”.

Both the ice cream social and movie night were scheduled to take place outside but were moved inside the COA building due to rain.

Last July, the COA hosted “Ice Cream Social Distancing” events at both of its Cass County locations. Both events were held outside to allow for proper social distancing.

The COA reopened its Cassopolis and Dowagiac locations to the public on March 1, along with some of its programs and services that had been temporarily shut down since mid-November. The organization is still restricting activities like its Yuker and Mahjong events, but opened up in-person fitness classes in June.

“We kept our core services going,” Hoger said. “Home care, Meals on Wheels, we were able to keep all of those services. Because of the pandemic, we weren’t able to do fun activities like this.

For Hoger and the guests, this year’s event was an opportunity to socialize and enjoy each other’s company after more than a year of isolation.

“There have been a lot of ‘I haven’t seen you in forever’ interactions taking place,” Hoger said. “We’re just glad to be back open for the people of the county.”

According to Hoger, the COA plans to be active in the Cass County community in the coming months, including appearing at the Cass County Fair Aug. 1-7 and hosting its annual cookout on August 18th.

“We have everybody out,” she said. “We fix lunch, we have music, we dance and do all kinds of stuff.”

DOWAGIAC — An energy and atmosphere not felt in two years returned to downtown Dowagiac this past weekend. The 35th... read more