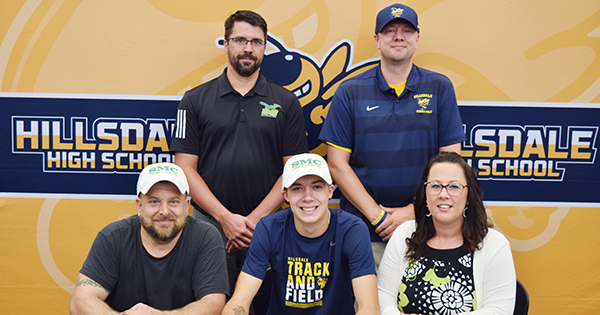 Thomas Lorenz, of Hillsdale, is the latest runner to sign with the Southwestern Michigan College cross country team. He is seen in front with parents Mike Lorenz (left) and Linda McDowell (right). In back are SMC Coach Zac Sartori and Hillsdale Coach Clay Schiman. (Submitted photo)

Lorenz, who wants to major in sports management, has been a sprinter in track throughout high school.

“It’s going to be an adjustment, but his work ethic and desire are going to help him be successful,” Schiman said. “He’s been running and getting prepared since our track season ended. He’s got the right mindset to make it work. He works really hard. I’m excited for him.”

“I’m excited about college because I can’t wait to meet new people from different areas and see how we differ and how we’re all the same,” Lorenz said.

A career program exposed him to SMC.

“The first three hours of the morning, during school, I learned IT (information technology). Our instructor set up a couple of meetings with colleges and the military so we could go see some of what they do,” Lorenz said. He currently works as a driver delivering pizzas for the Hillsdale Hungry Howie’s. “During COVID, we had to do it online. We saw a video of the IT program there. SMC’s perfect. It’s affordable and it’s a super-nice college with all of the stuff I want. It’s small and easy to get around. I’m excited about the trails and the training facility. I love working out and playing basketball.

“When I had orientation, I approached (Sartori) about cross country. I’m a track guy, but I want to give cross country a try, and he seemed eager to have me on the team,” Lorenz said. “Both of my parents ran cross country in high school. They didn’t push me to do it, but they said I’d probably be good at it. I love running. It’s one of my favorite things.”

Lorenz enjoys competition and how it makes him feel.

“I’ve always loved sports because it pushes you, and running seems to clear my head,” he said. After four years of high school and two years of middle school, distance is an entirely different breed of running. Sprinters learn how to use their pace for speed. Distance runners know how to use it all at the same time. I’m learning how to focus my pace so I don’t die out during the race.”

Lorenz likes “up north,” which led him to consider Lake Superior State University. He also likes fishing, “and I hear Dowagiac is really nice for fishing. I’m going to bring all three of my poles. I love being outdoors more than being indoors. My grandfather (also named Thomas Lorenz) grew up in Dowagiac and said it’s a nice place.”

Lorenz, who played basketball in high school and soccer as a youngster, has an older sister and a younger sister.