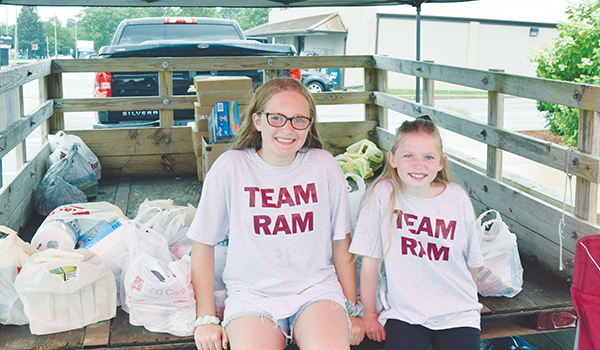 BUCHANAN – On Sunday evening, two 10-year-olds set up a tent, despite the on-again, off-again rain, in front of the Buchanan Police Department on Front Street.

Kate Holloway and Eloise Herrick were on a mission with their Third annual Fill Up a Trailer for Redbud Area Ministries challenge. Minutes after officially “opening” to accept donations at 5 p.m., community members began pulling up to the tent with clothing, non-perishable foods and personal hygiene products.

“We are super excited to say that they met their goal once again,” said Heidi, Kate’s mother. “Their food donation total was 1,528 items. After collecting over 1,000 items during their food drives, the girls used part of the cash donations to purchase an additional 500 items that are needed for RAM.”

Heidi added the girls raised $1,050 in cash that will be donated for the RAM Angel Fund.

“The first year we did this, we did it on a whim,” said Mimi, Eloise’s mother. “[The girls] went to RAM with Girl Scouts. The shelves were bare, and Jan [Nowak-Walters], RAM’s director, talked about how they couldn’t help feed the community with bare shelves. Kate and Eloise walked out of there and said they had to do something.”

The girls and their parents brainstormed possibilities, and within three days they had a booth at the Buchanan Farmer’s Market to collect donations.

“At the end of our three hours there, [the girls] had enough food to fill a trailer,” Mimi said. “We had to call Kate’s dad to bring it, because [the donations] wouldn’t fit in our cars. We were shocked.”

The next year, in 2020, Kate and Eloise tried to see if they could fill up the same trailer for a second time to make sure RAM had needed supplies over the summer, and they were able to do so. This year, the girls set out to increase their amounts, but still fill the trailer as the initial goal.

“When Jan came to Girl Scouts, and we did our first annual [collection], we realized how much it helped,” Kate said. “It was so much fun helping and working for RAM.”

Kate and Eloise said the people they have seen picking up items during the summer are younger to middle-aged, primarily.

“There’s more of a need because their kids are home,” Eloise said, about needing food donations. 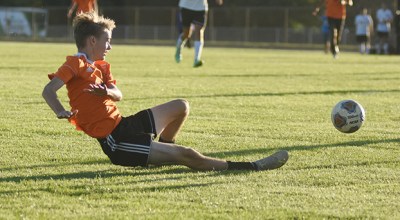 MDHHS urges residents to get flu vaccine during upcoming season