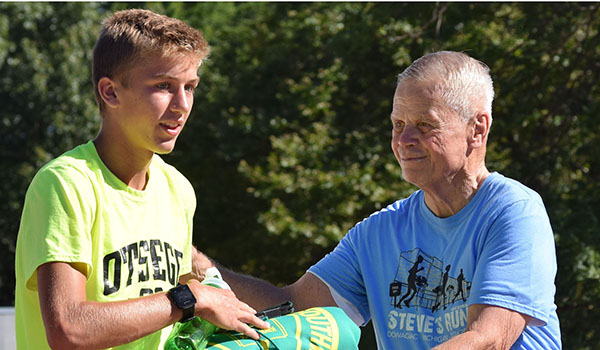 DOWAGIAC — Steve’s Run, the 47th Original Road and Trail Race, hosted virtually in 2020, not only returns as a live event on Oct. 9, it starts in downtown Dowagiac, as it last did in 2014.

The race, beginning and ending at City Hall, shifted in 2015 to Southwestern Michigan College’s Dowagiac campus, where it started and concluded in front of the David C. Briegel Building.

Dowagiac City Council approved the change on Monday, July 12, and The Grand Old City also hosts the Under the Harvest Moon Festival on race day.

“We are thrilled to again partner with the city of Dowagiac and to return part of the race to downtown,” said SMC Board of Trustees Chairman Thomas F. Jerdon. “We are grateful to have this beautiful downtown close by and want this event to benefit all, including the downtown businesses. It will enhance the sense of community by doing so.”

“Going back downtown’s an awesome move that really fires me up,” agreed founder Ron Gunn, whose Roadrunner Track Club sponsored the event through SMC’s 25th anniversary in 1989. “It will really enhance the event. The downtown start with people lining the street for blocks was pretty cool. I always liked the start and the finish with the fellowship.”

Gunn himself will be working on the new race course. Prior to 2015, the races ended at Lions Park along the creek, south of City Hall and the Front Street central business district.

What was recognized as one of the 10 best vacation runs in the country by Runner magazine started in 1972. After previous permutations as the Road and Trail Race, the Bud Lite Run and the Nike-Fair Store Run, it returned following a two-year hiatus as Steve’s Run in 1992. In 1991, there was a benefit run/walk for Steve around Eagle Lake in Edwardsburg.

“A lot of people did not know Steve, but everybody knows somebody touched by cancer who fought the same brave, determined battle,” Gunn said. “I’m sorry my good friend, Dave Briegel, won’t be here this year to see it.”

Steve’s Run supports all those still fighting cancer while honoring Steven Briegel, whose father, David, served as SMC’s fifth president for 17 years, from 1981 through 1998. President Briegel, who presented awards in 2017, passed away Jan. 13.

Steve, 22, died on March 1, 1990, after a five-and-a-half-year battle with cancer. He graduated fifth in Dowagiac Union High School’s Class of 1986 and played basketball and golf and in the band for the Chieftains. He graduated with honors from SMC in 1988 and was a junior in the Ferris State University program at SMC.

“We’re very grateful to Fifth Third Bank and all of their associates throughout the region, who step up year after year for this important cause,” said Vice President for Institutional Advancement and Race Director Mike O’Brien. “Their support is especially meaningful in 2021 so we can get back to running together in person as we emerge from the pandemic.”

Registration costs $1 for the Family Fun Run, $20 for the 5K Run or Walk and $25 for the 10K. Visit runsignup.com/StevesRun for online registration or to donate. Races get underway at 8:30 a.m. Oct. 9.