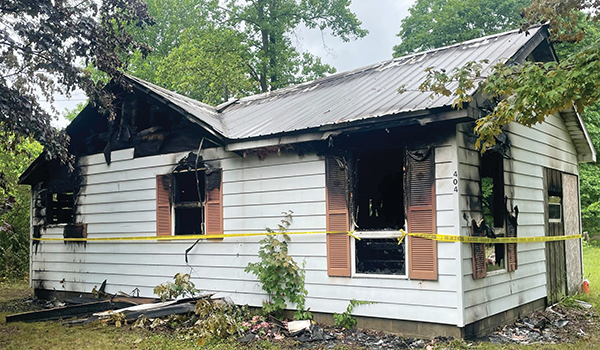 DOWAGIAC — A “suspicious” June 25 structure fire is under investigation by the Dowagiac Police Department.

The Dowagiac and Wayne Township Fire Departments were dispatched to a structure fire at 404 Thickstun St. in the city of Dowagiac at approximately 11:53 p.m. on Friday, June 25.

According to a released statement, the Dowagiac Police Department was the first to arrive on scene and reported a working structure fire at an unoccupied/abandoned house. Upon arrival, fire units reported the house well involved and set up exterior operations.

The Dowagiac and Wayne Township departments worked aggressively to knock down the bulk of the fire and then advanced inside to confirm the structure was not occupied.

The fire was declared under control at 12:14 a.m. Saturday morning as units remained on

scene for overhaul and investigation. The scene was cleared the scene at 1:21 a.m.

No injuries were reported.

The DPD considers the fire suspicious and under investigation as the utilities had been disconnected from the structure for some time.

Anyone with information that might assist in the investigation is asked by officers to call the Dowagiac Police Department at (269) 782-9743.

DOWAGIAC — After months of waiting, the curtain will once again rise for a local theater group. The Beckwith Theatre... read more