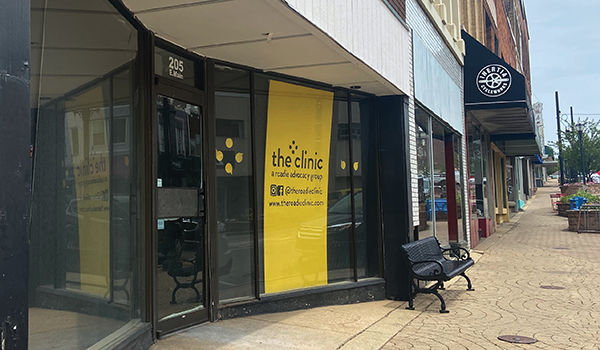 NILES – With all COVID-19 pandemic restrictions lifted in Michigan on Tuesday, live events, indoors and out, were given the greenlight to return to a pre-2020 normal.

Paul Klimson, chief operating officer of The Roadie Clinic, 205 E. Main St., Niles, has colleagues out in the field again doing the behind the scenes work once again to make large scale performances seem like a breeze for audience members.

Klimson, and wife, Courtney, chief executive officer of The Roadie Clinic, moved to Niles from New York City just after the pandemic arrived. Their mission was to renovate 205 E. Main St. and bring respite to the mental and emotional strains that the roadie life can leave professionals with over time. The two also run their own production company, Theory One Productions.

Paul’s career in the industry has been built over 20 years working with artists like John Legend and Justin Timberlake. However, the COVID-19 pandemic put a halt to almost all work in the industry.

Throughout the pandemic, as other states around the U.S. loosened COVID-19 mandates, the Klimsons saw the industry begin to reawaken after the long break that started March 2020.

Over what he calls “the break,” Paul worked a few projects that remained in production. Some of the gigs included were recorded special performances, like the iHeartRadio Music Festival, and television productions.

“It was a tiny fraction of what a normal year looks like,” he said.

Other states, like Texas, relaxed COVID-19 mandates earlier than Michigan, with some country artists performing in front of live audiences in April.

“At the end of the day, you have to get back out there and see how things react,” he said. “It’s tough being the first in. People were doing it safely with the knowledge they had at the time.”

Across the country, Paul said the live entertainment industry is slowly “waking up.” One area where live entertainment is currently thriving is outdoor spaces. In Niles, Riverfront Park has been host to its annual Summer Concert Series, while The NODE has seen Third Thursday performances and open mic nights.

“The first Third Thursday we had 70 people out there. The next one, about 200 people passed through,” Paul, who has helped host events at The NODE, said. “A lot of local fare coming down, people eating out of boxes and bags.”

Paul noted the energy as people were able to gather outdoors again. The energy is something that has helped feed his more than two-decade career in live events.

“[June’s Third Thursday event] was packed. People were dancing and lots of drinks coming from around the corner,” he said. “It was fun to see things live and that there was a direction here.”