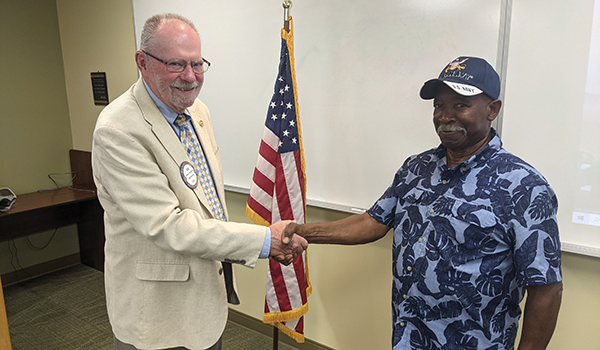 The Dowagiac Rotary Club welcomed Victor Fitz and Walter Swann as its new president and president-elect during its meeting Thursday at Front Street Crossing, Dowagiac. Outgoing Dowagiac Rotary Club president Bob Cochrane (left) is pictured shaking hands with Swann, who will take over for Fitz as president in 2022. (Leader photo/MAXWELL HARDEN)

DOWAGIAC — Thursday’s Dowagiac Rotary Club meeting marked the end of the Rotary year and the annual changing of the guard.

The club welcomed Victor Fitz and Walter Swann as its new president and president-elect during its weekly meeting.

The duo will assume their duties next week in the stead of outgoing president Bob Cochrane, who conducted his last meeting as president by welcoming the new leadership into the fold.

“It’s been a great year on my part,” Cochrane said. “I’ve had a lot of fun, and I’m really excited about turning things over to Victor, Walter and whoever they choose as their officers  and having another great Rotary year starting next week.”

Several members spoke highly of Cochrane, who did his best to keep the club afloat during the ongoing
COVID-19 pandemic.

“I appreciated your enthusiasm and the way you kept us all engaged during a time when things really weren’t that easy, so thank you a lot,” said Rotarian
Mark Herman.

“Thank you so much for a year of fine service during a difficult time,” said Rotary secretary Jennifer Ray.

Fitz has served as the Cass County Prosecutor since May 2003 and previously served as Rotary president back in 2013. Swann is a former professional boxer and U.S. Navy veteran who spends much of his free time conducting boxing lessons and mentoring local youth.

While not physically present, Fitz attended the meeting via Zoom and is aiming to increase club membership from its current number of 36 members to 101 members by Jan. 1, 2022, to commemorate the club’s 101 years of existence.

To do that, Fitz will ask each member to bring two people into the club next year.

“We all know people who would be good Rotarians in our circle of life,” Fitz said. “It’ll be our job to engage that. …We’ve got a lot of capable people, I think that’s doable.”

Fitz also wants to emphasize what he calls the group’s OPP — member orientation, programming and projects.

“We want to work on orientation so that when we get these new members engaged as to what they need to know and how they can get involved so they can feel like part of the club and know what we’re all about,” Fitz said. “One of the great things about Rotary is that we’ve had so many good programs over the years and I want to continue doing that. With projects, we want to find a project or two that we can make Rotary known for locally again. In the past, we had the basketball tournament and some other things so we will find something that will be impactful.”

Swann was on hand for Thursday’s meeting and looks forward to working with Fitz and serving the club.

“I’ll do the best I can,” Swann said. “I’ll ask anybody for help that can help me. If I make a mistake let me know. It’s like I used to say when I worked in the Navy shipyard, if you’re not doing anything, you can’t make a mistake. I’ll do everything I can to make this work.”

DOWAGIAC — Local businesses are doing their part to make sure the community has a Fourth of July holiday to... read more