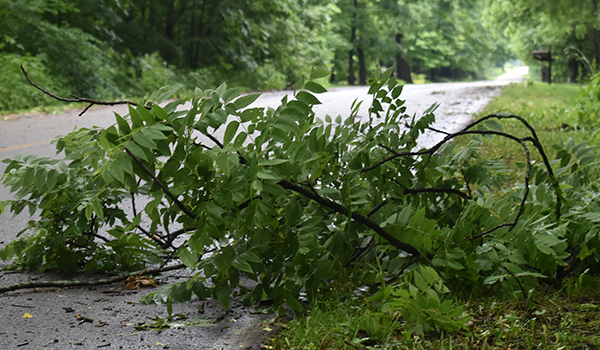 According to Kyle Brown, meteorologist with the National Weather Service office in Northern Indiana, which oversees southwest Michigan, the NWS is following up on a report of a tornado in Coldwater, Michigan.

“This morning, we continue to work closely with emergency managers to assess the damage,” Brown said. “Most of the damage that we had yesterday was either straight-line wind damage or microburst type damage.”

“We did have a couple wind speeds estimating in the Osceola, Indiana, area at 55 to 60 miles per hour,” Brown said. “Wind gusts of 60 mph or more is plausible [in southwest Michigan].”

There were two to three distinct rounds of thunderstorms that approached the southwest Michigan region Sunday evening, first arriving around 7 p.m.

A report of hail, 2 inches in diameter, in Eau Claire, Michigan, was received by the NWS.

“Just last week we were talking about how it had been a record number of days since our office had last issued a thunderstorm or tornado warning,” Brown said. “We have certainly solved that problem. Some folks have at least heard a thunderstorm once this spring or summer, but assessing property damage, this might be the first one here for the severe weather season.”

Rain falls were between one to two inches in Berrien and Cass counties. Four miles south of Watervliet, it was reported that 2.08 inches of rain fell overnight, while in one-mile northwest of Buchanan received 1.88 inches. South of Cassopolis, reports of 1.15 inches were received.

“Those are pretty notable rain totals,” Brown said. “When you have this much rain falling in a short amount of time, it’s only beneficial to a point. It will run off and not much will get absorbed into the soil. It is welcome, but it is not long-term [draught] relief.”

Indiana Michigan Power reported nearly 15,000 customers lost power during the storm, 4,000 of whom were located in southwest Michigan. As of 4:30 a.m., Midwest Energy and Communications reported that 3,700 customers were still without power.

SOUTHWEST MICHIGAN — Since the COVID-19 pandemic began more than a year ago, law enforcement agencies across the nation have... read more