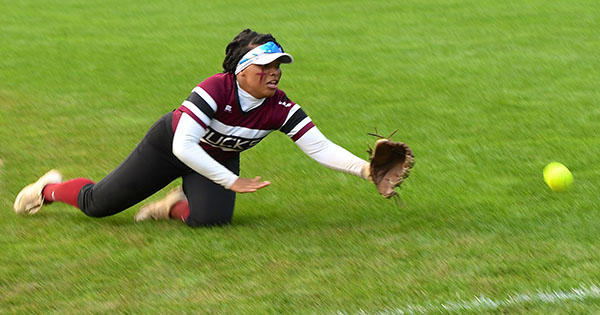 Buchanan second baseman Alea Fisher gives it her all to catch a bloop single against Richmond in the Division 3 state title game at MSU Saturday. (Leader photo/KELLY SWEENEY)

EAST LANSING — One inning was all it took to turn Buchanan’s dream of winning the school’s first state softball championship into an unexpected ending.

Richmond, ranked No. 4 in Division 3, used four hits, including a bloop single to left field and a bloop single into right field, to erase a 1-0 Bucks’ lead.

The Blue Devils (31-5) score two runs in that fateful sixth inning and held on for a 2-1 win and the Division 3 state championship.

Buchanan (36-5) played for the school’s first title after reaching the Final Four for the first time since 2006. Richmond claimed its second state championship. The Blue Devils also won in 2016.

“It feels like a broken heart,” said Buchanan Coach Rachel Carlson after the game. “This game could have gone either way at any point. It’s the best ball we’ve played all year. Richmond did what it had to do — it gutted that one out.”

Buchanan took the early lead in the title game with a run in the second inning.

A solo home run off the screen on the right-field foul pole by freshman Hailee Kara staked the Bucks’ to the early advantage.

Senior pitcher Sophia Lozmack, who was much sharper than in Buchanan’s 9-4 win over Standish-Sterling in Friday’s semifinal at Secchia Stadium on the campus of Michigan State University, looked like she was going to make that lead stand up with a little help from the stout Bucks’ defense.

Lozmack struck out more than twice as many hitters in the championship game (eight) and did not walk a batter. She gave up eight hits in the contest, four of which came in the sixth inning when the Blue Devils claimed the lead.

“She kept us off-balance for seven innings,” Carlson said. “Give her a lot of credit because we’re a great hitting team. She did a great job keeping us off the bases today.”

With one out, Richmond’s Piper Clark doubled, the only ball the Blue Devils hit hard the entire game. Lauren Creon’s single to right field put runners at first and third for Jaelyn Amhdar, whose bloop single to left scored Clark to tie the game. After Lozmack struck out Amelia Black, Makayla Revord singled over the first base and just out of the reach of Buchanan’s second baseman Alea Fisher, who was charging full steam after the ball.

Creon scored what would be the winning run on the play.

Buchanan had a two-out single by Lozmack in the sixth before doing down in order in the seventh.

Richmond pitcher Shea VanScoter tossed a three-hitter with nine strikeouts and no walks.

Fisher had the other hit for the Bucks, who return all but Lozmack and senior centerfielder Brooke Atkinson next season.

Buchanan will return juniors Fisher and Christin Cooper, sophomores Hannah Tompkins, Kamille Lemon and Sage Pruett, along with freshmen Kara, Camille Lozmack and Hannah Herman — all of whom are starters. Also returning will be Sara Faulkner, Naomi Tompkins and Alyvia Hickok.

Carlson said she believes her team will continue to work hard in the off-season to try and come back even better in 2022.

“These kids have a work ethic,” she said. “So I think they will continue to build and grow and get better. I couldn’t be prouder of them. Today they cheered each other on and never stopped.”