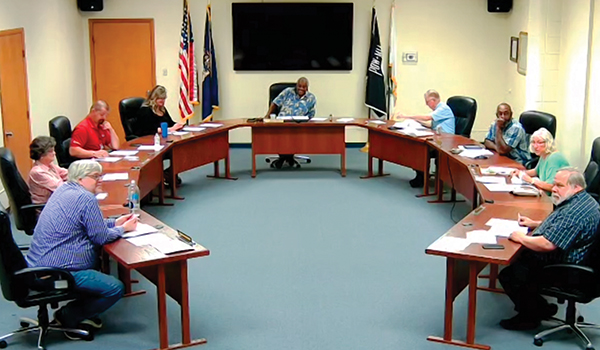 CASSOPOLIS — The Cass County Board of Commissioners attended to several items of routine business this week.

Thursday, the board met for its regularly scheduled meeting. On the agenda were two contracts for maintenance within the county.

First of the docket was a motion to approve a contract with Ayers Basement Systems for sidewalk leveling at all county buildings at a cost not to exceed $11.623. The project will be paid out of the Capital Project Fund.

According to a letter submitted by Facilities Director David Dickey, the county sent requests for proposals to three companies for the project. Ayers Basement Systems was the only company to provide a quote.

“Over time, there are areas that have settled and others have heaved, causing multiple trip hazards,’ Dickey said. “Concrete leveling is less expensive than removal and replacement.”

The motion was passed unanimously.

Next up was a motion to approve a cleaning contract with The Cleanest Company LLC for a two-year contract starting Thursday. The agreement comes at the cost of $10,095 per month. According to a letter from Dickey, the contract covers cleaning at central dispatch, the county building, the fitness center, the Law and Courts Building, the Cass County Sheriff’s Office and Animal Control. The contract begins June 21 and will be in effect until June 17, 2022.

The motion passed unanimously, with Commissioner Ryan Laylin abstaining due to a personal connection to the company.

Also Thursday, the board voted to approve a resolution to adopt and implement a 2021 classification and compensation study. The resolution was adopted 6-1, with Commissioner Robert Benjamin voting against.

According to the resolution, the board authorized a classification and compensation study to review and update county position descriptions and classifications. In June 2019, the effort was transferred to the county as the original consultant lost key personnel and was sold. According to the resolution, undertaking the study internally saved the county more than $30,000.

The study results voted on Thursday result from an agreement of a committee comprised of the county administrator, courts administrator, finance director, county treasurer, chief judge, county clerk, county prosecutor, sheriff and the board of commissioners.

While some county employees will see changes in their employment classifications due to the study, Carmen said most changes are upward mobility. Finance Director Becky Moore clarified that no employees are taking a pay cut due to the study.

“This is not about a cost of living adjustment. It’s not about performance bonuses. It’s not about a negotiated increase,” Carmen said. ‘It’s about the horizon of all the positions. … This is a living document that requires constant vigilance.”