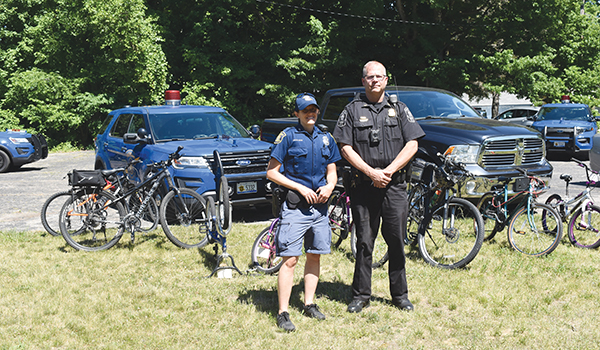 CASSOPOLIS — Wednesday evening, Cassopolis children had a “wheel” of time at an event hosted by area law enforcement.

Michigan State Police and the Cassopolis Police Department partnered to host a Bike with a Cop event starting at Cassopolis’ Clisbee Park. During the event, children ages five through 12 took part in a brief safety lesson before going on a bike ride with law enforcement officers. Children were also treated to food and goody bags filled with items such as coloring books.

According to MSP Trooper Holly Higgs, who organized the event, the Wednesday evening activity was inspired by a previous Bike with a Cop event hosted in Benton Harbor. Following the success of that event, Higgs said she wanted to bring it to Cassopolis.

“This is a great way to hang out with the kids and build a community connection,” Higgs said. “We want to engage with the community and everyone here. [Wednesday] was the kids’ last day of school, so this is kind of their big summer hurrah.”

Both Higgs and Cassopolis Police Chief Brian LaValle agreed that outreach events like Bike with a Cop are important to cultivating a positive relationship between the community and law enforcement.

“Most times [children] don’t get a chance to interact with the police in a positive light, except for maybe at school,” Higgs said. “This is letting them know that the officers they see around town are human. It puts a face to the name and lets them interact one on one.’

Both LaValle and Higgs said they were happy to see local children at the event — especially after a year where occasions were few and far between due to the COVID-19 pandemic.

“People have been pretty impatient to get out and do things, so now that they are able, we are seeing a lot more participation,” LaValle said.

“COVID restrictions have lifted a lot, so we are excited to host some more events,” Higgs added.

CASS COUNTY — As the state begins to emerge from COVID-19 lockdowns and warmer weather is here to stay, many... read more