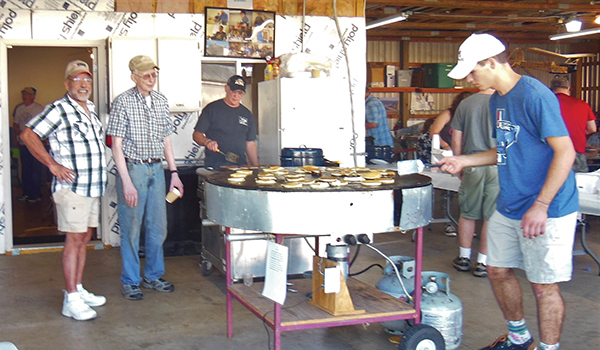 The morning begins at 8 a.m., with pilots and earthbound driver’s alike begin arriving to the Jerry Tyler Memorial Airport, 2018 Lake St., Niles. The event will run until noon.

The chapter’s hangar will host the event at its location on the east end of the airport grounds. There will be free parking, and an $8 all-you-can-eat pancakes, sausage, biscuits and gravy, orange juice, regular and decaf coffee available. The event will feature door prizes. Team Mini-Max Factory will host an open house the day of, featuring their partial and complete kits helping people build their own light aircraft.

EAA 865 secretary and newsletter editor, Ralph Ballard, said the breakfast is a way for members to fundraise for the chapter.

“We started out in the big hangar at the airport in 1986,” Ballard said. “We started adding pancake breakfasts and saving our money, and built our own hangar. That’s where we hold our breakfast [now].”

About 120 pilots have been invited to the annual event on Sunday.

“We usually have a pretty good turnout depending on the weather. If we have nice weather, it’s a bigger turnout,” Ballard said. “Sometimes, we have as many as 50 to 70 airplanes flying in.”
Those airplanes come in all shapes and sizes, from home-built airplanes, single-engine aircrafts, military and even jet passenger planes.

“You never know who is going to show up,” Ballard said.

Home-built aircrafts are what the EAA is built on, Ballard said. Antique aircrafts also have a place in the EAA.

Ballard has flown ultralight aircraft in the past, logging flying hours as a student pilot. Learning to fly an Aeronca single-engine plane was “a really big thrill” for Ballard.

During the June 27 breakfast, aircrafts from participating pilots will be on display for attendees to observe near the fixed-base operator office.

“Founded in 1953 by a group of individuals in Milwaukee, Wisconsin, who were interested in building their own airplanes, EAA expanded its mission of growing participation in aviation to include antiques, classics, warbirds, aerobatic aircraft, ultralights, helicopters and contemporary manufactured aircraft,” reads a statement on the EAA website.

According to the 2020 annual report on the website, there are 900 active EAA chapters worldwide.