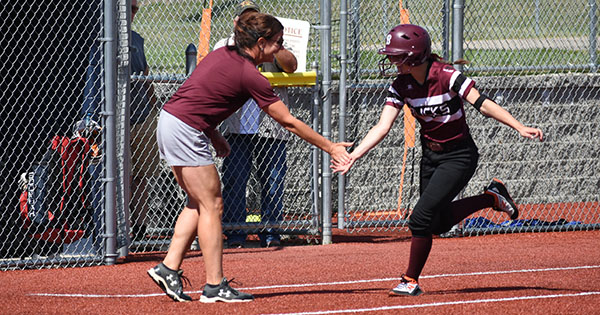 GRAND RAPIDS — Known for its pitching and defense, Buchanan let its bats do the talking in the Division 3 quarterfinals against No. 5-ranked Central Montcalm.

The Bucks (35-4) scored early and often on their way to an 11-2 rout of the Green Hornets, which earned them a spot in the semifinal at 3 p.m. at Michigan State University against Sterling-Standish (32-11) Friday.

Buchanan used a 17-hit offensive barrage to overwhelm Central Montcalm. The Bucks scored in every inning with the exception of the fifth and sixth.

The Green Hornets trailed 5-0 before they finally averted the shutout. It was 8-1 before they scored their final run of the game.

After being shut out in back-to-back innings, Buchanan capped its win with a three-run seventh inning.

“We weren’t happy with the way we hit the ball Saturday,” said Buchanan Coach Rachel Carlson. “I gave them the day off Sunday because it was a long and hot day on Saturday. We came back [Monday] really focused. We fine-tuned that hitting. I told them they were going to hit the ball today, and that is what we did. This team is essentially unstoppable when they hit the ball like that.”

The top five hitters in the Bucks’ lineup did most of the damage against the Green Hornets.

Freshmen Hannah Herman and Hailee Kara were a combined 7-of-9 with two home runs, a double and six RBIs.

Herman’s two-run home run in the fourth inning increased Buchanan’s advantage to 8-2. It came after Central Montcalm scored its first run in the bottom of the third and ended any chance of the Green Hornet comeback.

Brooke Atkinson, one of two seniors on the Bucks’ roster, was 3-for-5 from the leadoff spot. The other senior, Sophia Lozmack, was solid in the circle as she gave up two runs on eight hits with five strikeouts and no walks.

“Sometimes she focuses on hitting her spots instead of gassing it up,” Carlson said about Lozmack in the later innings when it appeared she might have been tiring. “I think she was trying to hit her locations and not giving them anything good to hit. She has been unbelievable on the hill this season.”

Hannah Tompkins, a sophomore, was 3-for-4 with a double and an RBI.

Friday’s semifinals will be only the second in school history for Buchanan. The Bucks appeared in the 2006 Final Four, but were defeated by eventual state champion Unionville-Sebewaing 3-2.

Carlson is proud of her seniors, who lost an entire season due to COVID.

“They came to workouts all winter focused,” she said. “And with all of our young kids, that just fed the beast. Their leadership has shown them what we do and the young kids are focused. We just really focused the season on being a team — being together and being a team. They have bought into that.”