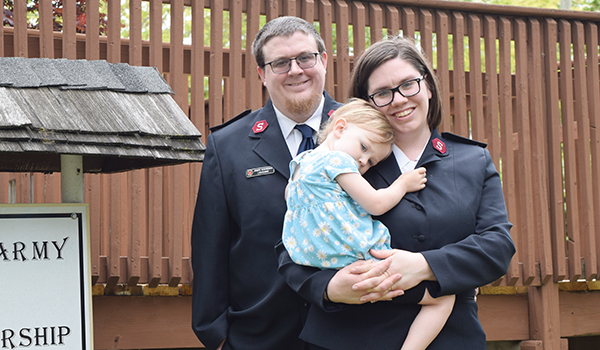 NILES – Throughout the past four years, the lieutenants serving at The Salvation Army in Niles have helped the community weather a flood, a fire and the COVID-19 pandemic.

Salvation Army Lieutenants Kendra and Joseph Hixenbaugh will soon be ending their assignment in Niles. Their last day at The Salvation Army Niles post, 242 N. 15th St., before moving on to their next post in Goshen, Indiana, will be June 27.

Four years ago, the Hixenbaughs were a newlywed couple who had a whirlwind of exciting life changes that landed them together in the Niles community.

Joseph had been commissioned for a year, but as the lieutenants got married, they would be given their assignment together.

“As part of the graduation or coronation, [the Salvation Army] announced live, on-stage, in front of thousands of people, where we were going,” Joseph said.

Joseph had never heard of Niles. Kendra knew of it because she had taken Amtrak trains through Michigan and seen the station. The adventure landed them in place prior to the 2018 flood and in Niles during the arrival and height of the COVID-19 pandemic. Kendra was pregnant with the couple’s child, Helena, when the flood occurred.

“There was one day when [Joseph] did a 20-hour day, and I did 18-hours in my first trimester. I was really tired already,” Kendra said. “That was good. We really enjoyed doing emergency disaster work and being able to be a part of that.”

Being early in their post assignment, the Hixenbaughs were able to meet members of the community and other emergency response agencies through flood relief efforts.

“It was not good that it happened, but it was wonderful to be able to work with people, get to know more people and be a part of the cleanup,” Kendra said.

Joseph said that when events like the flood or the pandemic happen, their focus shifts quickly.

“You just drop what you’re doing and focus on how you can meet peoples’ needs. That’s been our goal since we’ve been here and it hasn’t changed,” Joseph said. “It won’t change long after we’re gone.”

The flood helped the lieutenants, Berrien County and the city of Niles put together an emergency response consortium, which still meets every couple of months.

As part of the Salvation Army’s mission, during times of disaster in a community, the Hixenbaughs were able to be a part of the team that helped provide rental, utility and food assistance to residents in need. They can serve food and drinks, and be a part of the community’s pastoral care.

“When the fire happened in Buchanan [West Wind Apartment fire in March 2021], we grabbed a little cart and walked around with waters,” Kendra said. “We just enjoy being able to be a part of that [response] and being there when people need us. We work with other agencies who are able to fulfill those short-term hotel stays and things like that.”

Upon arriving in Niles in 2017, one of the Hixenbaughs’ goals in Niles was to grow the Salvation Army’s youth program. Before the pandemic, Kendra said the program had a regular attendance of 18 to 20 youths through the week.

“That was really a lot of fun. We were able to provide a meal for them and teach them life skills. We did fun things,” Kendra said.

Some of the children were able to attend the camp in Grand Rapids over the summer.

“Hopefully, now that COVID is slowing down, the Montgomerys can work on it, and it can be just as strong,” Kendra said.

“They come with a wealth of experience,” Kendra said. “They have had a vast variety of appointments and knowledge they can bring to Niles.”

The Hixenbaughs knew their appointment in Niles could be coming to an end this year. The Salvation Army assignments can be longer but oftentimes last between four and six years.

On May 24, Mayor Nick Shelton presented Joseph and Kendra with “certificates of appreciation” for their work in the community.

On June 27, the Hixenbaughs will host a cake reception following Sunday services at the Salvation Army for the community to stop by and see the lieutenants before they leave for their next stop in Goshen.

SOUTHWEST MICHIGAN — As of Tuesday, Berrien County reported 13,882 COVID-19 cases and 269 deaths, according to the Michigan Department... read more