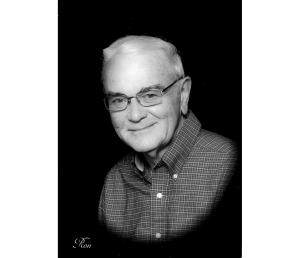 Originally from Chicago, Illinois, Ron completed his education at the University of Iowa where he earned his bachelor’s degree in business administration in 1958. Following college, he served in the U.S. Army where he was stationed in Korea and Japan. In 1961, Ron joined the J.C. Penney Company at its Marshalltown, Iowa store. He relocated nine times, with assignments in Rochester and St. Cloud, Minnesota, Norfolk, Nebraska, and Milwaukee, Wisconsin, as well as Champaign, Kankakee, and Pekin, Illinois. He transferred to Niles in 1986. During his 35-year tenure with the company, Ron worked in operations, buying, human resources, and store management positions.

Ron was active in many business and community organizations, working with the United Way and Junior Achievement. He was past president of the Niles Merchants Association and served on the Board of Directors of the Niles Chamber of Commerce. He was also a past president of the Retail Trade Council, a member of Civitan Club, Rotary International, and the Four Flags Garden Club. Ron was a State Board member, and later elected Director at Large for the Federated Garden Clubs of Michigan from 1999-2002.

In June of 1969, Ron married his wife, Linda, in Des Moines, Iowa. He and Linda resided in Niles for 32 years, prior to her passing in 2008. They were long time members of the First Presbyterian Church in Niles. Ron had a strong passion for flower gardening and was a volunteer at Fernwood Botanical Center where he earned his Master Gardener Certification.

Ron is preceded in death by his parents, Stanley and Ruth Sather.

He is survived by his brother and sister-in-law, David and Linda Sather, of Denver, Colorado; a special person in Ron’s life, his foster son, Will Johnson; nieces, Laura (Barry) Reeves, Catherine (Doug) Jones and Suzy Harkias; grandnieces, Alex Reeves, Charlotte Jones, and Olivia Harkias; grandnephew, Max Harkias; and many friends.

Funeral services will be held on Friday, May 28, 2021, at Brown Funeral Home & Cremation Services in Niles at 1 p.m. with a time of visitation one hour prior. Full Military Honors will be rendered by the U.S. Army and the Buchanan American Legion Post 51.