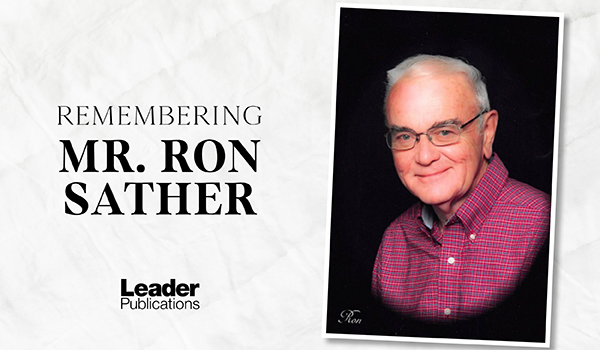 NILES — The greater Niles business community has lost one of its greatest supporters.

Past president of the Four Flags Area Chamber of Commerce Director Ron Sather, 85, died Tuesday at his home in Buchanan. The former Niles resident served 15 years as the chamber director prior to his retirement in 2013. Additionally, he served as past president of both the Retail Trade Council and the Merchants Association, as well as Director at Large for the Federated Garden Clubs of Michigan. He was also involved in the Four Flags Garden Club, United Way, Junior Achievement, Civitan and Rotary.

“During his time at the chamber, Ron worked tirelessly to support area businesses and acted as a true champion of our region,” wrote representatives of the Greater Niles Chamber of Commerce in a Tuesday night Facebook post. “Ron’s passing represents an enormous loss to this community, and our most heartfelt condolences go out to Ron’s family, friends and neighbors.”

Originally from Chicago, Sather was born March 19, 1936. In 1958, he earned his degree in business administration from the University of Iowa before serving the U.S. Army in both Korea and Japan.

He got his start in the business community in 1961 when he began working at the J.C. Penney Company in Marshalltown, Iowa. He relocated nine times, with assignments in Rochester and St. Cloud, Minnesota; Norfolk, Nebraska; Milwaukee, Wisconsin; and Champaign, Kankakee and Pekin, Illinois. He transferred to Niles in 1986, and during his 35-year career with J.C. Penney, he working in operations, buy, human resource and store management positions.

After his service with the J.C. Penney Company, Sather served as president of the Four Flags Area Chamber of Commerce.

According to those who worked with Sather during his time as president, he was a pillar of the Niles business community.

“Ron had a tremendous impact on our community for a really long time,” said Jeff Rea, president of both the Greater Niles Chamber of Commerce and the South Bend Regional Chamber. “He was the face of the greater Niles business community for a long time, and so many of our small businesses really relied on him. We are all saddened by his loss and are thinking of his family during this time.”

Rea met Sather while working at the South Beth Regional Chamber and Sather was president of the Four Flags Area Chamber of Commerce. Even though the two worked across state lines, Rea said Sather understood the importance of networking between businesses and chambers.

“I had great respect for him,” Rea said. “I think a lot of the success that we see in downtown today — and we obviously have some good, hardworking people now working on things — can be traced back to some important seeds that were planted a long time ago by people like Ron, who recognized how important a vibrant downtown community is.”

Niles Main Street Director Lisa Croteau also met Sather through work, as both her organization and the chamber shared similar goals of supporting the Niles business community and a vibrant downtown.

“He was wonderful,” Croteau said of Sather. “We worked on projects and businesses downtown, and he was always a delightful man to work with. I’ve never seen anyone be able to fundraise for events like Ron could do. He was masterful and highly respected by everyone in the community.”

Though both Croteau and Rea knew Sather in a primarily professional setting, they said they believed him to be a good man in his personal life as well.

“He was a great guy, and I was so sad to hear of his passing,” Croteau said. “He cared a lot about the community.”

“I was always grateful for his kindness,” Rea added.

Funeral services for Sather will be hosted Friday at Brown Funeral Home. The family asks that memorial contributions be made either to the Niles DDA Main Street, 333 N. Second Street, Niles, or Fernwood Botanical Garden, 13988 Range Line Road, Niles.

NILES – The show must, can and will go on for Brandywine Middle and High School students in their production... read more