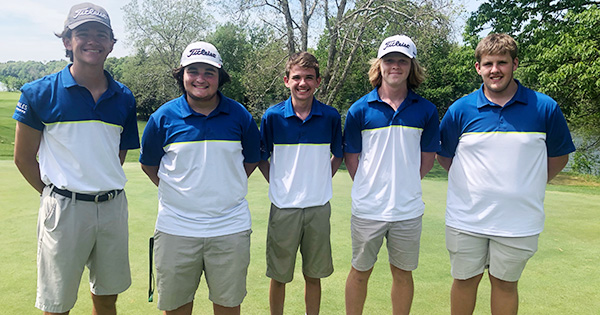 BUCHANAN — Led by medalist Evan Bruckner, the Niles golf team put the finishing touches on their one and only BCS Conference championship at Orchard Hills Country Club Monday.

The Vikings, who will move to the Wolverine Conference next season, shot 349 as a team to easily outdistance runner-up Bridgman, which finished with a score of 414, Host Buchanan finished third with a 415, while Brandywine was 10th with a score of 578.

Bruckner shot 81 to earn medalist honors for the Vikings.

Golfers were greeted by perfect conditions, which included bright sunshine, warm temperatures and no wind.

Niles Coach Dan Brawley was pleased with his team’s effort, which comes just a week before the Vikings and the rest of the field will begin play in the state tournament.

“Kids played well today,” he said. “Orchard’s rough was difficult today. The rough was high, and so were the scores. Evan Bruckner played solid golf today. He got on the par train, didn’t make many mistakes and put together a nice round. Kade Delinski was a huge bright spot for us. He’s been working hard and his 90 was his personal best of the season.”

The Vikings also got an 86 from Matt McKeel and a 92 from George Pullen. Aiden Krueger shot 99.

Niles will head play at the Coldwater Golf Club June 3. The Division 2 state finals will be played at Bedford Valley in Battle Creek June 11-12.

Buchanan and Brandywine will play at Hawkshead Links in South Haven June 2. The Division 3 state finals will be played at The Meadows on the campus of Grand Valley State University June 11-12.