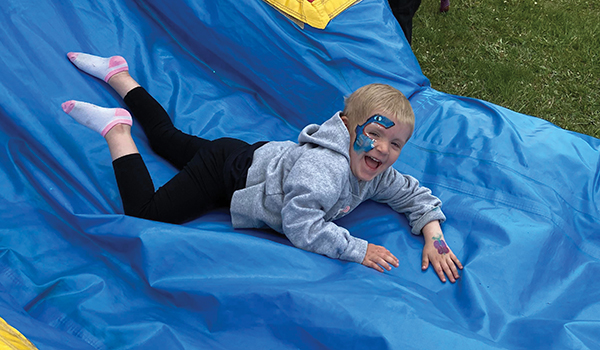 Brooklynn Bowman, 3, of Niles, slides down an inflatable slide on Saturday at a fair hosted to raise funds for she and her family as she fights leukemia. Bowman was diagnosed when she was 2, and has continued her fight into a maintenance phase this year. (Submitted)

NILES – Last Saturday, friends of Brooklynn Bowman hosted a fair at the Cass County Fair grounds to raise money for her continued fight against leukemia.

The event had a corn hole tournament, face paint, mini horses, food, prizes, kids games, chair massages and more to support the family and the financial burden that comes with hospitalization and cancer treatments.

Brooklynn turned 3 years old May 2. It was an important birthday for her, and her family, as she has been in a “maintenance” phase of treatment. According to her mother, Trenity, Brooklynn has chemotherapy treatments at home every night of the week.

“She has a year and a half left to go, after maintenance,” Trenity said. “Tuesday nights, she does two rounds of two different chemos. On the weekend, she does chemo and another medicine.”

With the treatments, Trenity said Brooklynn is a “very happy little girl.”

“They don’t see any leukemia cells right now,” Trenity said. “You couldn’t tell she was sick unless you know.”

“I had to wake her up to get her to eat, drink or do anything,” Trenity said. “On July 29, her face was pale. Really pale. She had sunken eyes.”

After having gone to the doctor before looking for answers, Trenity took Brooklynn to the emergency room. She was told her daughter was fighting a virus, but she had a feeling it was more than that. After a negative strep throat and COVID-19 test, Trenity wanted bloodwork done.

“I knew no toddler sleeps for two days straight,” she said.

When the lab results showed up in her MiChart account, Trenity’s fears that something deeper was wrong were confirmed. Her white blood cells, red blood cells and platelets were very low.

She was told that her daughter had leukemia or bone marrow cancer.

“I asked [the doctor] where the best place was to go [for treatment],” Trenity recalled. “He said the Helen DeVos Children’s Hospital.”

Trenity was transferred to the children’s hospital in Grand Rapids on July 29.

“By the time we got there, they had platelets, blood, fluid, everything she needed. That was a Thursday. The next Friday, she did a bone marrow biopsy. We were told for sure that it was leukemia,” Trenity said. “That following Monday, she got put in for another bone marrow biopsy to make sure everything was where it was supposed to be. [The medical staff] placed a report, and they started chemotherapy the following Monday.”

Both Trenity and father, Bret, were able sit with Brooklynn while she received her treatments.

“We live in Niles, and the hospital is in Grand Rapids. Her dad had to drive back and forth a lot,” said Trenity.

Trenity stayed at Helen DeVos Children’s Hospital from late July to the beginning of September.

“The doctor at DeVos [Children’s Hospital] said that if we had waited one more week, we wouldn’t have her today,” Trenity said.

Throughout the Brooklynn’s fight against leukemia, she has been supported by family, friends and the community. Last year, a GoFundMe was set up by Trenity’s friend to help the family as they split their time between two cities.

“We can’t help Brooklynn fight this fight with [everyone],” Trenity said. “It takes an army to fight cancer.

Brooklyn was able to attend Saturday’s event, organized by Trenity and Bret’s friends.

Final numbers for funds raised by the event are still being counted, according to Trenity, but she was pleased with the turnout.

Through Friday, May 21, Healthy Habits, 305 E. Main St., Niles, is donating $1 from each shake and tea sale to Brooklynn Bowman’s medical expenses. A donation jar is set up inside the business to additional donations.

LANSING — To remind everyone about the importance of buckling up, the Michigan Office of Highway Safety Planning launched Monday... read more