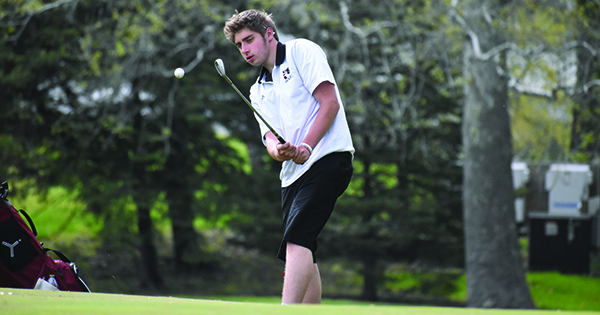 The Bucks placed third in the competition held at Orchard Hills Country Club as visiting Kalamazoo Christian took first place with a score of 168.

“I was very impressed with Kalamazoo Christian,” said Buchanan coach Christopher Watkins. “We saw them for the first time on Friday and they can play. They’ve got some guys that can go low.”

While Orchard Hills may be Buchanan’s home course, that does not mean it is always smooth sailing for the Bucks.

“The rough is long,” Watkins said. “It’s a short course, but it’s very tight. You have to be very precise, and you never want to be above the hole. If you’re above the hole, there’s a good chance you’ll three-putt almost every time.”

Buchanan’s Ethan Valentine and John Gartland both fired scores of 44 to tie for second place overall. Logan Carson fired a 56 and Nick McKeon a 77.

“I played well,” Gartland said. “The putting definitely was where I struggled today. The greens were rolling fast, and it’s easy to blow them by. These greens are tricky.”

“I started off a little rough,” Valentine said. “I definitely didn’t work on my putting. I was blowing some putts by or leaving them too short, but other than that, if you hit fairways and hit greens below the hole, you’re in a good position to score well. That’s what I took into consideration today, so I’ll definitely do that in the next match.”

The Bucks participated in the White Pigeon Invitational on Friday where they faced KC and Division 4 No. 1-ranked Kalamazoo Hackett. Watkins was glad his team had the opportunity to play such competition ahead of next week’s conference meet at Orchard Hills.

“If [John and Ethan] can do that on the front none and the back, you’ll compete to win the conference,” Watkins said. “So, seeing them shoot that was really good.”

Following Monday’s tournament, Valentine holds a slim lead atop the conference standings. After missing their junior seasons due to the pandemic, Gartland and Valentine are hoping for an exciting finish to their prep careers.

“My goal this year was to just have fun,” Valentine said. “We didn’t have a season last year, so I wasn’t gonna take this year for granted. So I went out there, and I had fun, and I just really practiced pretty hard. I want to maintain that number one spot going into the conference championship, and hopefully I walk away with all-conference.”

“I’m a senior and it’s always been one of my goals to make all-conference every year,” Gartland said. “Our junior year was canceled because of COVID, so I’m hoping to make a statement this year.”

LANSING — To remind everyone about the importance of buckling up, the Michigan Office of Highway Safety Planning launched Monday... read more