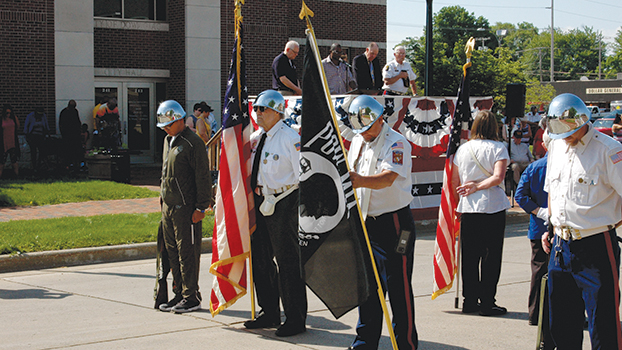 SOUTHWEST MICHIGAN — Memorial Day came with an extra dose of sorrow last year, as communities across the country had to cancel the usual festivities due to the COVID-19 pandemic.

Though residents across southwest Michigan found new ways to celebrate, such as the banners that were hung throughout downtown Buchanan to honor area veterans, the lack of Memorial Day celebrations still left a void.

“It was the first time in 20 years me and my family didn’t have the parade,” said Angela Bair, one of the organizers of Buchanan’s celebration. “It was heartbreaking.”

After seeing traditional events canceled last year throughout southwest Michigan communities, parade planners are now looking to leaving last year’s struggles behind them. Monday, May 31 will be filled with parades and ceremonies to honor those who has given their lives in service to the U.S.

“It’s a community event that we need after the last year and a half we have had,” said Gordon Carr, an organizer with Edwardsburg’s festivities.

With some communities keeping past traditions alive and others starting new ones, each community in Leader Publications’ coverage area has different events planned celebrate the holiday.

Kicking off the weekend, the Auxiliary American Legion-Buchanan Post will be having a drive-thru poppy sale starting at 9 a.m. Friday May 28 and Saturday May 29, with proceeds going to local veterans in need. The parade begins at 10 a.m. Monday, May 31, starting at the American Legion and ending at Oak Ridge Cemetery. Along the parade route, banners will be displayed to honor area veterans.

“Having the parade is a sign of hope for what is to come,” Bair said.

Cassopolis’ parade starts at 10 a.m. with a different route than in years past. The procession will start on Water Street, running up Broadway and ending at Cemetery Street. Following the parade, a ceremony will take place at Prospect Hill Cemetery.

“Memorial Day is our day to remember our fallen heroes, so please come join us at the Cemetery as we give tribute to those who have given much to our Grand Republic,” said organizer Chris Bergen.

“Hopefully, people will get out and honor those who have fought for us because they are the reason, we can live the way we do,” said Chuck Timmons, Masons of Peninsular Lodge #10, the organization hosting the parade.

The Presbyterian Church will be hosting a drive-thru pancake breakfast from 8 to 11 a.m. with goodwill donations and proceeds going to Hero Haul. The parade will start after the breakfast at 11 a.m., starting at Edwardsburg schools and going to Veteran’s Circle. A small ceremony will take place at Veteran’s Circle.

“We need to come together and show that we are Edwardsburg strong, so come one and come all,” Carr said.

“It will be nice to see people out on the streets again enjoying the city and holiday,” said organizer Odie Stewart.