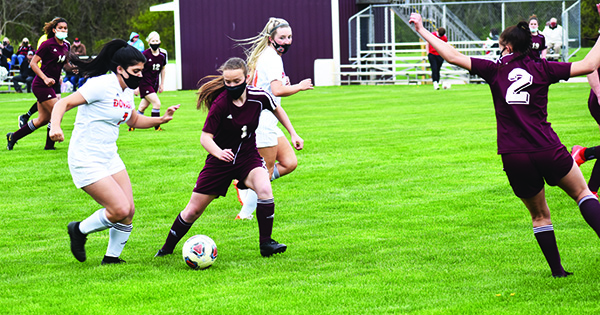 The MHSAA released the seeds for the upcoming district soccer tournament. District pairings are now being released by the host schools. (Leader file photo)

Brandywine is hosting the Division 3 district, which is scheduled to begin May 26.

Constantine will host Buchanan in the opening round at 5 p.m. The winner advances to the semifinals June 1 against the winner of the Berrien Springs and Dowagiac quarterfinal match at 5 p.m. May 27. The Shamrocks will host that match.

Brandywine will host Three Rivers in its opening match on 5 p.m. May 26. The winner of that match will take on Coloma, which received a first-round bye.

The sites for the semifinals have not been announced. The championship match at Brandywine will be at 5 p.m. June 3.

Paw Paw is the host school for the Division 2 soccer district.

Edwardsburg will travel to Paw Paw for its district opener, which is which is scheduled to begin at 5 p.m. Wednesday.

The winner of those matches will meet in the semifinals at 5 p.m. June 1.

St. Joseph will get the winner of the Sturgis-Vicksburg first round match in the second semifinal at 7 p.m. June 1.

The championship match is scheduled for 6 p.m. June 4.

Lakeshore will be the host of the Division 2 district baseball tournament.

Niles and Dowagiac will have the play-in game at 5 p.m. June 1 in Stevensville. The winner advances to the district semifinals at 10 a.m. June 5 to take Berrien Springs, which received a first-round bye.

Edwardsburg and Lakeshore, who also received byes, will meet in the second semifinal at approximately 12:30 p.m. The championship is set for 3 p.m.

Bridgman will host the Division 3 tournament, which will begin with the Bees hosting Brandywine in the play-in game at 4:30 p.m. June 1.

The winner advances to face Watervliet in the first semifinal at 10 a.m. June 5.

Buchanan and Coloma will play in the second semifinal at approximately noon. The finals are scheduled for 2 p.m.

The district draw for the softball tournament hosted by Edwardsburg will have Niles and Paw Paw facing off in the play-in game at 4:30 p.m. June 1. Niles will host the game.

The winner of the game will advance to face Dowagiac in the district semifinal at 10 a.m. June 5 at Edwardsburg. The other semifinal will pit the host Eddies against Wolverine Conference foe Three Rivers at approximately noon.

Buchanan and Brandywine will play in the Division 3 district being hosted by Bronson.

The Bobcats will face Centreville in the play-in game at 5 p.m. June 1 in Bronson. The winner advances to face the host Vikings in the first semifinal at 10 a.m. June 5.

Constantine and Buchanan will play in the second semifinal at approximately noon. The championship game is scheduled for 2 p.m.