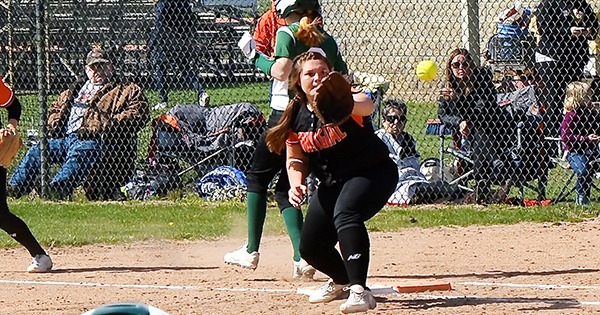 The Dowagiac softball team won three out of four games in less than 24 hours this weekend. (Leader file photo)

DOWAGIAC — The Dowagiac softball team capped a busy couple of days with a tournament championship on Saturday.

The Chieftains played four games in less than 24 hours, winning four of those contests. Dowagiac split a pair of Wolverine Conference games on Friday before traveling to Three Oaks on Saturday to go 3-0 and win the River Valley Invitational.

“We played pretty well today to take home the championship,” said Dowagiac Coach Mike Behnke. “Sierra pitched two very good games, and Sarah Allen came on in relief against Hartford to shut them down. Sarah also had a clutch two-run double in the last inning against River Calley and her first career home run against Hartford. Caleigh Wimberley also had a good day at the plate and ran the bases well, taking many extra bases.”

The Chieftains (13-7) defeated host River Valley 4-2 in the opening game before knocking off Hartford 11-7 and Constantine 12-3.

The win over Hartford avenged a 6-1 loss to the Indians at the Chieftain Invitational on April 17.

Dowagiac finished with just three hits — all singles — by Carpenter, Sarah Allen and Jessie Hulett. Allen’s hit was a double.

Against Hartford, the Chieftains scored 11 runs on 10 hits, led by Caleigh Wimberley, who was 2-for-3 with a pair of RBIs. Emma Allen, and Sarah Allen were both 2-for-4. Sarah Allen had a home run, while Emma Allen and Kimi Beattie both drove in a pair of runs. Carpenter added a single and an RBI.

Hulett started in the circle for Dowagiac, but was relieved by Aubrey Busby, who pitched an inning and two-thirds before giving way to Sarah Allen, who worked four and a third innings to earn the victory. Allen allowed three hits with six strikeouts and no walks.

Wimberley was 4-for-5 with a double and an RBI. Calley Ruff, Busby, Anna Dobberstein, Carpenter and Hulett all had two hits. Dobberstein had a double, a home run and drove in a pair of runs, while Carpenter added a solo home run.

Dowagiac rallied to win the first game against the Red Wolves 7-6, but dropped the nightcap 12-8.

Carpenter’s walk-off double scored Dobberstein, who reached base on an error by Paw Paw to lead off the bottom of the seventh.

The Chieftains outhit the Red Wolves 8-7 in the opener. The two teams combined for 12 errors.

Carpenter ended the game 2-for-2. Dowagiac also got a double from Carpenter and a home run by Emma Allen.

Carpenter suffered the loss as she gave up seven hits and struck out seven. Only three of the seven runs Paw Paw scored were earned.

In the nightcap, The Red Wolves used a six-run fourth inning to open up a 9-3 lead on the Chieftains. Dowagiac rallied with five runs in the bottom of the fifth, but still trailed Paw Paw 9-8. The Red Wolves added a pair of insurance runs in the top of the seventh to complete the scoring.

NILES — When the Niles and Dowagiac football teams hit the gridiron in 2021, both will have new faces running... read more