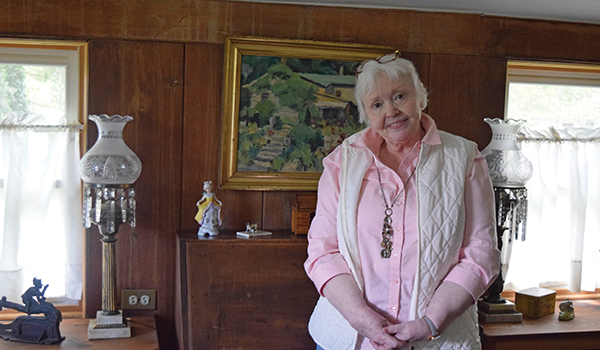 NILES – Hand drawn maps of neighborhoods, black and white photographs of buildings and people, and passionately penned facts and connections run through the paper of a book that is filled with history on one of early
Niles’ architects.

Niles resident Jeanne Watson recently received the handwritten manuscript her mother wrote from a local historian’s collection. The discovery connected her to the local and family history she was raised with and continues to be passionate about.

As she sat with the book, Watson carefully turned the pages containing her mother’s, Patricia Benson-Bachman who passed away in 2007, handwriting and drawings. Photographs and cards were attached to pages to illustrate the properties and the people Benson-Bachman had researched and written about. As Watson read through, she connected the recorded history to the rest of the knowledge she has of her family and
Niles history.

“I don’t know what to make of it,” Watson said. “It was by my mother, about Jacob K. Brown. I think it was a list of all the buildings he built about the country.”

Brown is known to have built some of the fine, early homes in Niles. As a young man in the 1830s and 1840s, he purchased properties and built areas in the city that are still seen today. According to a July 11, 2009, article published in the Niles Daily Star, Brown built stores occupied by the Niles Daily Mirror, Larimore Drug Store and the Wm. B. Beeson Store in 1860.

“Brown was one of the trustees of Niles, the village, chosen at the first village election in 1838,” the article said, though his construction would be his legacy.

Brown and Watson are related, and with each flip of the page of the manuscript, another story and memory comes to life out of the pages. Watson said Brown was her mother’s great-great-grandfather.

After receiving the manuscript, Watson came to the home she owns on at 1915 N. Fifth St., Niles, to go through the manuscript. She is surrounded by local and family history within its walls.

The historical home, built in 1836 by a builder named “Clark,” was where Watson’s great-grandmother Gertrude “Gerty” Smith set up shop as an antique dealer. The business had to be registered under a man’s name to be seen as legitimate at the time.

“All of these women would come out from Chicago on the train to buy ‘heritage,’” Watson said.

They would find treasures to use as heirlooms.

“[Smith] was the first antique dealer between Detroit and Chicago,” Watson said. “Many famous people came to this house, including artist Tunis Ponsen.”

While Smith is not the center of the manuscript, she is a part of it. In fact, Watson can connect much of Brown’s history and her family’s role in the area.

“This book was designed to identify and preserve two facets of the life of Jacob K. Brown, previously unknown to his descendants,” Watson read from the manuscript. “They are his ancestors and the structures he built.”

Watson read her mother’s writing, which credited Wayne C. Mann, of Portage, Michigan, with much of the familial data.

“His sustained interest in this project has also been appreciated by the author,” Watson read from the manuscript.

According to an obituary in the Kalamazoo Gazette, Mann passed away in 2014. He was born in Niles and lived in Buchanan until he graduated from high school. According to the obituary, Mann “was appointed field representative for the Archives and Regional History Collections for Western Michigan University, serving from 1963 to 1965. He was then promoted to assistant archivist from 1965 to 1967, and finally appointed as Archivist and Director of Regional History Collections, from which he retired as director emeritus in 1995.”

Benson-Bachman also acknowledged the Niles Community Library, the New Carlisle and Olive Township Library, and city employees and local residents for their help in compiling
information.

Watson estimates her mother put the manuscript together sometime around 1977. This would have placed her mother in her early 60s at the time
of writing.

Throughout the manuscript, Watson turns the pages to see black and white photographs of Brown’s buildings in Niles, as well as in California.

“There’s a list of properties,” Watson said. “We went to visit one in California that he built.”

Another page shows a house in Ohio that Brown built.

The manuscript went unpublished, but was preserved. Though the manuscript never made its way into the public eye, it now provides Watson with a once-lost connection to her own history.

As Watson read through her mother’s notes, she noted the background her mother had as a clinical psychologist, licensed audiologist and speech correctionist. Her note taking style was analytical and thorough to match.

“She had a total of 29 years of college — two masters degrees, a mail order law degree, which is good enough to take the bar exam with,” Watson said of Benson-Bachman.

The manuscript adds another leaf to the history Watson has of her family’s story and roots in Niles, but it also connects her with her mother’s passions.

“Look at how meticulous she was,” she said, as she turned the page to read another.

NILES – On May 7, a Niles business founded on flavor was announced as SCORE Kalamazoo/Southwest Michigan’s 2021 Entrepreneur of... read more