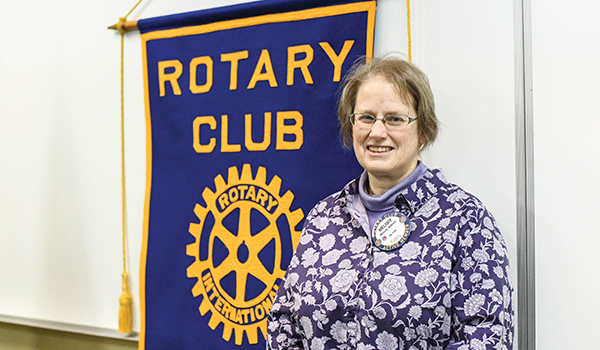 DOWAGIAC — An outgoing Dowagiac Rotarian was presented with one of the group’s most prestigious awards.

“We are here to honor a very special and very deserving person,” said Rotarian Dick Judd, who presented Wallace with the award.

Judd said Wallace was nominated for the award in 2019, but due to changes in the club’s meeting spaces and then the arrival of the COVID-19 pandemic, postponed Wallace’s recognition.

“[Wallace] has been very diverse in her service both here [at Rotary] and in the community,” Judd said. “She has made a big impact.”

Speaking before the club, Wallace said she was grateful for the award.

“I just want to say ‘thank you’ to everyone,” she said.

The award comes as Wallace prepares to leave Dowagiac. She recently accepted a position as associate pastor of member care at a church in Ooltewah, Tennessee.

Though Wallace is leaving the Dowagiac Rotary Club behind, she plans to join the Rotary Club in Chattanooga, Tennessee.

“I’m hoping to get involved in that,” she said. “I want that to be a part of my outreach because I know [Rotary] does a lot for its communities. … Rotary is a great opportunity to serve locally here in Dowagiac. Just keep up the work you are doing.”