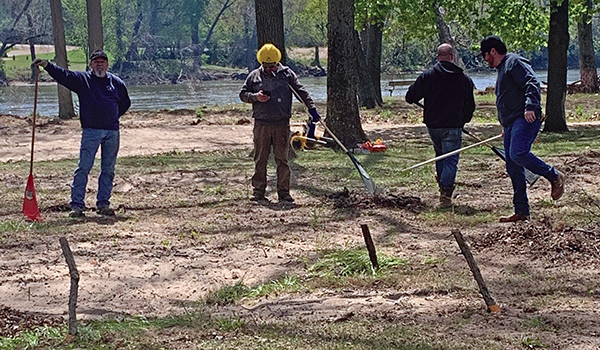 The workers spent time throughout the day at Island Park, located near the 400 block of Parkway in Niles, working on improvements for the park, which has remained closed since the historic February 2018 flood.

The volunteers spent the day clearing debris, raking and generally cleaning up the park.

“Our overall intent and goal is to renovate the park to pre-flood conditions for the continued enjoyment of friends and families throughout the community of Niles,” Pike said.

The Indeck Niles Energy Center and Kiewit Power Constructors volunteers’ efforts mean that Island Park will soon be reopened to the community.

“We are going to try to have it open by the end of next week,” said Niles City Administrator Ric Huff. “There’s still some debris at the park.”

Some of the dusk-to-dawn lighting will be repaired next, Huff said. M.A.A.C. Properties will be cleaning up the bank along Parkway Street for the park’s entrance.

Pike said Indeck has been planning the cleanup effort for the past year.

“We wanted to do something for the community, to have a project as being a part of being a good neighbor, now that we’re here,” Pike said.

Pike said the company reached out to Huff nearly a year and a half ago to find out about projects in the community the company could help with.

“With COVID restrictions, we didn’t think the timing would be right to have between 50 and 100 people down [at the park] donating services,” Pike said. “We kept waiting and found this opportunity.”
Pike said throughout the day, 30 to 35 people were at the park on Saturday beginning at 6 a.m. through dusk working on improving the park.

“Some people were doing shifts,” Pike said. “Some stopped by for an hour or two. Every man hour helps.”

After the work was done on Saturday, Pike said the volunteers could be proud of their work.

“I think it really looks 100 times better. We still have to do some final cleanup,” he said.

Pike commented on the unique nature of Niles having a park like Island Park, which allows visitors to enjoy the St. Joseph River.

“We will be through the better part of it next year,” Pike said “We have had our peak manpower the last couple of months, with the most people on-site.”

More than 700 people are working on the center.

The center’s outer build will not be altered too much at this point, Pike said.

“The skyline will remain the same,” he said. “We need to do all the connections to make it safe and operational.”

EDWARDSBURG – Visual collaborations from area residents will soon be on display in the village of Edwardsburg. Starting next week,... read more