CASSOPOLIS — The Cass County Sheriff’s Office spent Wednesday afternoon honoring a deputy who died in the line of duty.

“It’s a beautiful day,” said Cass County Sheriff Richard Behnke. “We’ve had snow. We’ve had rain, everything under the sun. We’re thankful for the sun.”

The event has been hosted every year since 2001 in conjunction with National Police Officers Week with the exception of last year’s event, which was canceled due to the pandemic.

“It was nice to get back to having it,” Behnke said. “Last year, we did not have the opportunity to have it because of COVID. It’s nice to get back and give the proper recognition to not only Shane Britton, but to all the law enforcement officers who made the ultimate sacrifice.”

The service included a presentation of colors by the Cass County Honor Guard followed by an invocation from chaplain Randy Peterson. After a law enforcement prayer from captain Tom Jacobs, Britton’s widow, Lynn Dekker, read a letter from Britton’s mother, Beth, before delivering a speech of her own for the first time in 20 years. 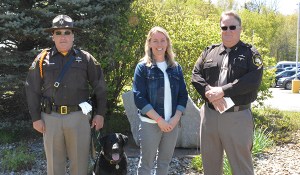 “Sadly, many departments and families are walking the same journey,” Dekker said. “I wanted to take this opportunity to thank each of you for serving in law enforcement. Things have changed over the past 20 years, and I commend each of you for your work. Thank you for making our communities safe and for upholding justice. I always pray for your safety and protection, and I pray that you will have great wisdom and discernment, especially when you must act quickly in difficult situations. Please be careful and make sure you get home to your families.”

Britton joined the Cass County Sheriff’s Office in March 1999 after serving as a reserve officer in Hudsonville. He died in the line of duty at approximately 11:10 p.m. July 19, 1999 while responding to a call for assistance from the Ontwa Township Police Department. Eighteen years after his father’s death, Britton’s son, Luke, joined the Dowagiac Police Department as a way of carrying on his father’s legacy.

To this day, Britton is the only Cass County Sheriff’s Office deputy killed in the line of duty.

“Shane was an exceptional officer,” Behnke said. “His career was cut way too short with us. He was dedicated. He would have been rising up the ranks by now after 20 years. He was very compassionate. He was professional, and his faith and everything that he brought with him made him that much of a better officer. Every year, we are reminded of how great he was and how dedicated he was to his family, his faith and the office.”