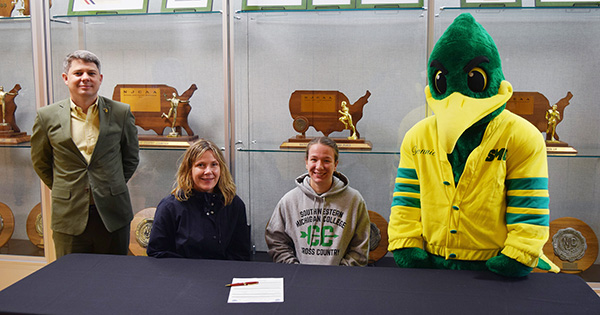 Union’s Del Guanto to run for SMC in the fall

Del Guanto was joined at the signing in front of the new Recruiting Gallery trophy case in the Student Activity Center by her mother, Rachael, SMC President Dr. Joe Odenwald and mascot, Ronnie Roadrunner.

Del Guanto, who ultimately wants to study nursing, was born in Minnesota and lived there for about five years before her family moved to the Constantine school district in Mason Township, which hugs the border with Indiana.

She has worked for almost two years over the state line at the Brittany Court Culver’s in Elkhart. “I have a friend at my work who went here and she liked it,” Del Guanto said.

Del Guanto has never run competitively. Her “sport” in high school was FIRST Robotics for five years. FIRST is an acronym For Inspiration and Recognition of Science and Technology.

“I was on one team that built small robots and another that made robots as big as a person,” she said. “We went to Detroit. That was a lot of fun.”

Now, she looks forward to her future studies and career.

“I want to work in pediatric oncology one day because of my family’s experience with cancer,” she said. “I want to be able to help other people. Nurses are really needed with COVID, so I could move anywhere and I’ll have a job. It’s a practical decision.”

Though Del Guanto has never run at the competition level, she immersed herself in running during quarantine.

“I’ve always liked running a lot,” she said. “Stuck in the house, I wanted to get out. I’m excited that they would consider me for the team.”