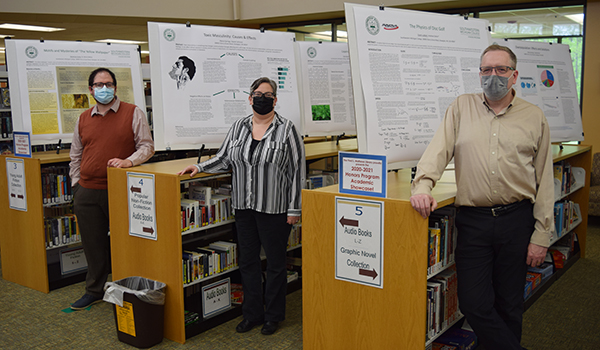 DOWAGIAC — The Fred L. Mathews Library on Southwestern Michigan College’s campus is decked out with posters ready to educate curious eyes on everything from literature to animal welfare to the popular game of disc golf.

Ten research poster presentations by SMC Honors Program students are currently being showcased in Fred L. Mathews Library on the Dowagiac campus. Typically, the event is hosted in the college’s art gallery with creators on hand at an in-person reception. However, due to ongoing COVID-19 precautions, college officials opted to host the presentations in the library.

SMC officials said Mathews Library is a frequent collaborator across the college.

“There are not many things we haven’t done, outside of eating in groups, in spite of the pandemic. Most things have gone on — even theatre and honor-society inductions. People have found ways,” he said.

Despite the changes to this year’s showings, staff said they still believed students were given a valuable experience.

“They still have the opportunity to get their work out there and to put it on their resumes,” said faculty advisor Gary Franchy.  “That students get to do undergraduate research and present it their first and second years is a big selling point of the Honors Program. At most schools that might not happen until master’s level.”

“The Honors Program proved challenging,” Munson said. “It has been a great experience. It’s pushed me to reach my full potential and prepared me to learn at a university level.”

“Instead of focusing on how to improve conditions in captivity, the world needs to orient its attention to the real problem at hand: human activity contributing to habitat destruction,” Rogalski said of the ethics of captivity.

Rogalski, majoring in biology to become a zoologist focused on ecology and conservation, transfers to Western Michigan University with a full-ride scholarship.

“I think it held some relevance in regards to the ongoing pandemic,” Cortez said of Charlotte Perkins Gilman’s 1892 story about mental illness and the impact of isolation and loneliness.

“Growing up on a farm surrounded by horses since I could walk is when my dream of being a veterinarian became real,” the biology major said.

After she completes her associate degree, Orpurt plans to transfer to the University of Tennessee to continue her undergraduate studies with the goal of admission to the Volunteers’ Doctorate of Veterinary Medicine Program.

SOUTHWEST MICHIGAN — As of Tuesday, Berrien County reported 13,521 COVID-19 cases and 255 deaths, according to the Michigan Department... read more