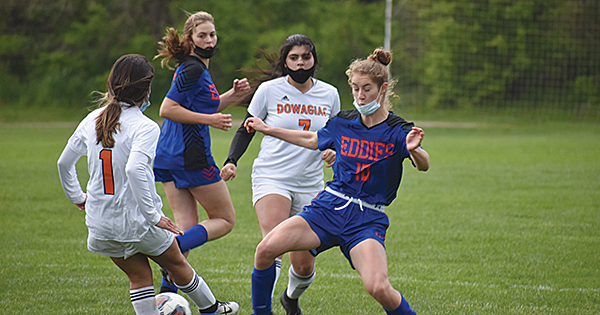 Edwardsburg — After struggling in lopsided losses the past few weeks, the Edwardsburg girls soccer team was ready to notch a ‘W’ in the win column.

Allie Connor got Dowagiac on the board with a goal in the first half, and Riley Stack found the net in the second half.

Trailing 3-2 with 10 minutes remaining in the game, Dowagiac coach Chad Davis pulled his goalie to have 11 players attack the Edwardsburg net to force a tie. However, the Eddies were able to overcome the disadvantage when Laubach scored at the 32-minute mark to put the game out of reach.

“I thought it was a ‘heckuva’ game,” said Dowagiac coach Chad Davis. “I pulled our keeper to try to knot up the game. It didn’t go our way, but we went for it. We never hang back. We always go for it. It was a fun game.”

After being outscored 23-4 during its five-game losing streak, Edwardsburg coach Sean Jesse was glad to see his team find some success on Thursday.

“We’ve had a difficult run playing the best teams in the conference,” Jesse said. “It’s nice to match up with a team and actually be able to work on some things. It was a pretty evenly matched game for long parts of it. We’ve changed our formation to be a little more attack-minded, which helps us get a lot more shots today and more pressure on the goal.”

The season has been challenging for coaches as they try to navigate it amid the COVID pandemic. According to Davis, nine Chieftains were not available for the game due to either quarantine or injury, including five starters. That left 12 girls in total to suit up.

“We battled and battled,” Davis said. “Tonight was a tough one. Being short-handed really tested the girls’ willpower. I thought they did an amazing job of fighting the entire game.”

Davis was impressed with the play of Julianna Reynaga and Allie Connor.

“Juliana was just a lockdown defender today,” he said. “They have some pretty good offensive weapons, and she did an amazing job. Connor put pressure on them the whole game and never gave up.”

The performances of sophomores Stewart and Laubach were impressive, Jesse said.

“Those two played very well, and then our backline is made up of workhorses. All three of them work hard, and they get success because they work hard.”

Edwardsburg (3-6) and Dowagiac (2-2-1) hope to get healthy and finish the season strong to prepare for districts. The Chieftains host Sturgis at 5 p.m. Friday, and the Eddies host Plainwell at 5:30 p.m. Tuesday.

“We’ve definitely had a lot of growth starting from the beginning of the season to now,” Jesse said. “We definitely have some work to do, but I think we’re in a good spot.”

EAST LANSING — The addition of a girls division to the individual wrestling tournament series and approval of a common... read more