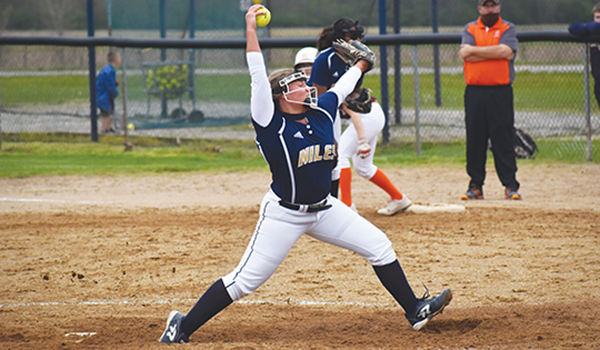 Niles’ Mya Syson delivers to the plate in Niles’ non-conference doubleheader Monday. The Viking split the two games with the Huskies, winning the opener 5-4, but losing the nightcap 17-3. (Leader photo/MAXWELL HARDEN)

NILES — Monday’s doubleheader against the Portage Northern was a rollercoaster ride for the Niles softball team.

The Vikings pulled off a 5-4 come-from-behind victory over the Huskies in game one before falling 17-3 in game two.

Trailing 4-3 in the bottom of the seventh in game one, Alexis Rauch hit a walk-off single off the fence to score the game-tying and game-winning runs for the Vikings. She had two hits and three RBIs in the game and Bailey Bickel added two hits. Pitcher Mya Syson struck out six batters while surrendering three earned runs.

The Huskies responded in the second half by scoring 17 unanswered points before the Vikings scored three in the fifth inning. Taylor Young had two hits and two RBIs to lead the Vikings. Chloe Hargreaves picked up the loss on the mound by giving up right earned runs and five hits in 1.1 innings pitched.

“Overall, I’m proud of the girls. We gained a split in this series, and we got a heavy schedule this week. We just have to push through. We have some injuries now so we just have to do what we can do.”

The split moves the Vikings to 9-6 on the season. Niles faces Three Rivers on Tuesday and Lakeshore on Wednesday.

“We are making strides, but we still have a long way to go,” Myer said. “There are some little things we still are not doing right yet at the varsity level, and it’s hurting us. We’re coming along, but we’re still behind.”