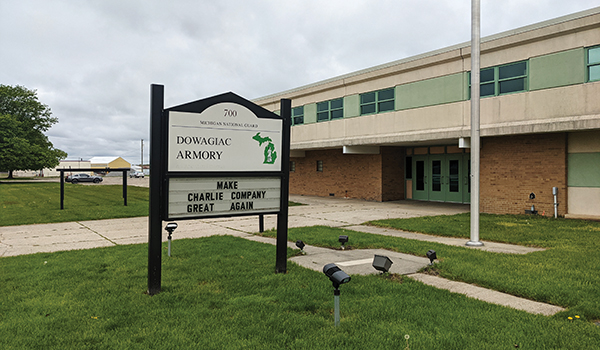 The armory, located at 700 W. Prairie Ronde, is hosting its inaugural Food Truck Muster from 5 to 8 p.m. Wednesday in its parking lot. Admission is free.

“As recruiters, we’re here to represent the National Guard to the community,” said Sergeant First Class Jason Brautigam, the National Guard’s lead recruiter for the area along with Staff Sergeant Kelsey Poirier. “I love food trucks and some of the bigger cities have food truck rallies. We don’t have many food trucks in Dowagiac. We figured this would be a great opportunity to bring awareness to the armory while also serving the community.”

Tables and chairs will be set up in the middle of the parking lot for guests to use. The armory will be following COVID-19 protocols, including contact tracing, socially distancing tables and sanitizing tables after every use. Masks must be worn when not eating.

According to Brautigam, a raffle will be conducted featuring National Guard apparel and vendor gift cards.

“You do not have to be present when the winner is announced,” he said.

The National Guard is a reserve component of the U.S. Armed Forces that can be deployed or mobilized for federal and domestic missions. The Guard responds to domestic emergencies, overseas combat missions, counterdrug efforts, reconstruction missions and more.

Composed of National Guard military members and units from each state and territory, more than 350,000 people are currently serving.

The event was the result of a brainstorming session, with the armory trying to find ways to engage the community and recruit prospects amid the pandemic.

“It was something to do,” Brautigam said. “We spent time trying to find things to do as recruiters since we have not been able to get into schools and fairs for more than a year. We’ve been trying to be creative. We heard this idea from a recruiter from another state. 30 minutes later, we started sending invites out to food trucks.”

Brautigan hopes community members enjoy the event while learning more about the armory.

“It’s a community event,” he said. “We hope people come out and have a good time. This could become a monthly event for us.”