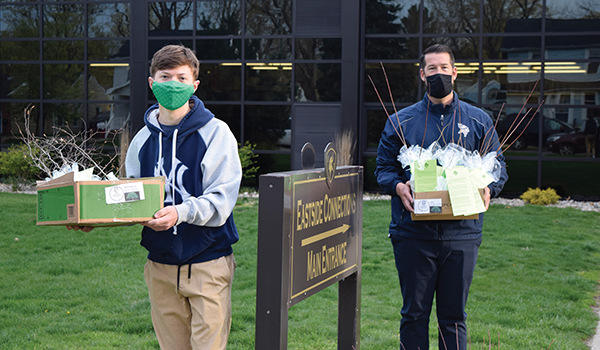 NILES – Between Earth Day last Thursday, and Arbor Day on Friday, April 30, Stuart Lundberg, chairman of The Lundberg Project, is hoping 100 trees will be planted around the Niles community.

Friday morning, Lundberg dropped off saplings of four different varieties – American Beech, Red Maple, Witch Hazel and White Dogwood – to Eastside Connections School and St. Mary’s Catholic School. The saplings were taken to participating classrooms to be given to students to take home and plant.

“I reached out to Fernwood, and they offered to buy trees from the Berrien Conservation District,” Lundberg said.

With 100 tree saplings picked up on Thursday afternoon, Lundberg worked with his mother, Angie, to separate the saplings out by tree type, bag and tag them, and attach information to each one, before bringing them to the schools on Friday morning, the day after Earth Day.

Eastside Connection School Principal Joe Racht was on hand to receive the saplings to bring into the classrooms for students.

Prior to the drop-off, Lundberg recorded a video of himself outside to send to the classrooms receiving the saplings.

“I read a book for the younger kids. These are going to first graders all the way up to eighth-graders,” Lundberg said.

Lundberg read “Would You, Could You Plant a Tree? With Dr. Seuss’s Lorax,” by Todd Tarpley.

Steve Bornell, manager of facilities and grounds at Fernwood Botanical Gardens, said Lundberg reached out to Fernwood to learn more about the trees for Earth Day.

“Fernwood participated in an Arbor Day at Eastside Connections School two years ago. [Lundberg] remembered that, and contacted us to explain what he wanted to do,” Bornell said.

Bornell was able to procure the 100 saplings from the Berrien County Conservatory to donate to Lundberg’s initiative.

The trees Bornell chose are all native to the southwest Michigan area.

“They support native wildlife, as opposed to do some ornamental trees in peoples’ areas that are not indigenous to the area,” Bornell said.

Lundberg made informational labels to attach to each sapling, so students would know what they were taking home. Each one includes the type of tree and the best way to plant it and care for it.

“I think it’s so important that young people are learning and engaging and taking part in caring for the environment and nature,” said Elaine Rowland, director of development and external relations at Fernwood. “Green initiatives, and the fact that [Lundberg] started a ‘green committee’ [at Niles High School], is so wonderful. We do think that’s very important and are happy to be a part of that.”

Lundberg said he was grateful to be able to complete his Earth Day project.

“Thank you, Fernwood, Berrien County Conservation, and Eastside Connections and St. Mary’s for accepting the saplings,” Lundberg said. “And thanks to all the students who are going to plant them.”