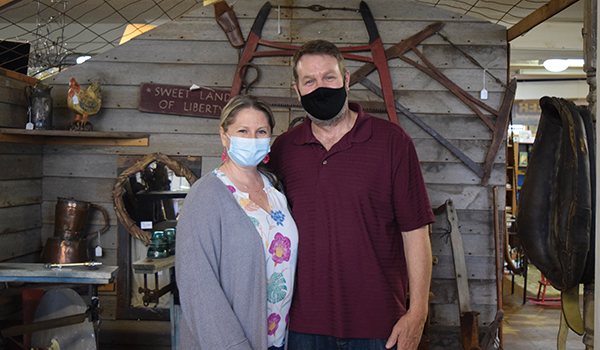 The Lakemans took ownership of the antique mall in October.

On Saturday morning, the antique mall had lines at the counter and shoppers discovering treasures throughout the two levels of the former Montgomery Ward building. The facility houses more than 120 booths for antique sellers to showcase wares and for shoppers to find something new to their collections.

During the event, shoppers took the invitation to explore the store’s newer booths, restored appearance and find new treasures to take home.

The event hosted a raffle and had snacks available for shoppers to enjoy throughout their visit.

“We had a lot going on with changing the appearance of the mall and the virus going on [in October],” Bill said. “We really didn’t think it was appropriate to have a big event last fall. We thought, hopefully, it was getting better. A lot of the higher-risk people are vaccinated. We thought it was time to ‘get it moving.’”

Bill said the owners have been working on restoring some original elements of the building as they worked toward the grand re-opening event. One of the most notable is the light fixtures floating above the booths, making the space seem brighter.

“Those are original,” Bill said. “A lot of them we rescued from the basement. We are still working on that.”

Another change shoppers will find is a different selection on the second level.

“We changed from doing a lot of crafts up here, to making it mostly antiques and collectibles,” Bill said.

During the grand reopening, the Lakemans sat in one of the shopping counters installed in the store on the second level, ready to answer customer questions.

“We’re trying to change the whole mood and make it a fun experience,” Bill said. “I’ve tried to get some gimmicky things in here too. We’ve got a drive-thru neon sign. There’s a scoreboard up front, which is kind of fun.”

Bill said the store has hired at least one additional staff member to help market the antique mall throughout the area.

The mall will have popcorn on hand for weekend shoppers, as well.

“We’re getting geared up for summer and making sure we have enough people to cover our bases with the increased traffic,” Bill said.

The mall is open seven days a week. More information can be found at fourflagsantiquemall.com.