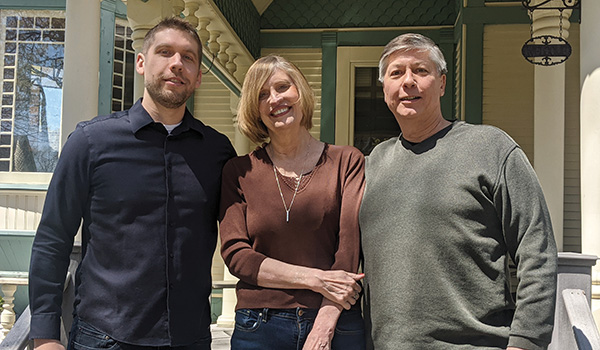 Local short-term rentals begin to bounce back from pandemic crunch

DOWAGIAC — The year 2020 was a harrowing time for Ted Gogol and his family.

Gogol, co-owner of The Lodges at Stone Lake Vacation Rental Projects in Cassopolis with his wife, Brenda, was trying to keep his five-property, short-term rental business of more than 10 years afloat amid the COVID-19 pandemic.

“When lockdown orders were first issued, that wiped out reservations through June,” Gogol said. “We lost two thirds of summer reservations and most of our fall reservations,” he said. “We had to refund virtually every reservation. So not only did we not have money coming in, we had to send money out. It was a tremendous financial hit.”

Ted and Brenda Gogol run the family business with their son, Christian, who handles marketing and quote distribution. What started as a one-lodge vacation rental has turned into a five-property STR business along the banks of Stone Lake that the family enjoys operating. But that almost came to an end last spring. The pandemic-induced hit was so big, in fact, that the Gogols contemplated foreclosing their vacation homes altogether.

“We invested half of our retirement into business,” Gogol said. “We thought we were in danger of losing everything. More than 10 years of hard work would have gone up in smoke. How would I get a job in the middle of pandemic at age 62? Those questions were racing through my mind.”

Gogol was not alone in his struggles. The short-term rental market as a whole has yet to recover from the pandemic’s fallout, with booked listings — properties that have been booked for at least one day in the given month — on Airbnb and Vrbo constantly 25 to 30 percent below the previous year’s level, according to industry analytics firm AirDNA.

According to Gogol, the business began getting inquiries for summer and fall in May as pandemic fear began subsiding. That is when the Gogols decided to buck Gov. Gretchen Whitmer’s executive orders and accept summer reservations.

“If we don’t accept summer and fall reservations, we’ll lose our business,” Gogol said. “Our thought was if we’re in jail, at least we’ll have roofs over our heads. If people want to come, they can.”

According to Gogol, cash started coming back in for summer reservations and in October, the Michigan Supreme Court ruled that Gov. Whitmer lacked the power to issue executive orders in response to the coronavirus pandemic without consent from thea Legislature.

“We were thankful,” he said. “We lost a ton of money but things were looking up and started offering discounts. We’re fortunate we stuck to our guns. We were not going to follow what we considered unconstitutional orders.”

Fast forward to today and Gogol’s business is almost debt free from refunds after losing what amounted to a year of revenue.

While short-term rentals have been negatively impacted by the pandemic, they have not been hit as hard as hotels have, likely due to the fact they are less dependent on business travelers. According to Statista, a company specializing in market and consumer data, some STR listings even performed better than usual during the crisis, as travelers sought out rural, drive-to destinations in the absence of many other travel options.

The 1870 House, 306 W. Division, Dowagiac, a new short-term vacation rental property owned and operated by city residents Richard Jackson and Zena Burns, is one of those listings that has performed well since opening its doors in early March.

The property — a five-bedroom whole-home vacation rental that sleeps up to 10 — was named after the year it was built.

“We’ve been really lucky to have a tremendous response,” Burns said. “We’re booked mid-May through early July. Have already started getting bookings for July and beyond with several other inquiries in the process of firming up. We’re finding that people who are interested like that it’s an entire home and do not have to deal with sharing space.”

According to Burns, guests from Chicago, Detroit and beyond are seeking out Dowagiac as a drive-to destination they can explore.

Keeping their properties clean amid the pandemic is something that both Gogol and Burns take very seriously and has led to an increase in business.

“That’s something we have found that people are in the market for,” Burns said. “We’re losing revenue due to the time it takes to clean and sanitize, but it has helped us get new bookings. People want to feel safe when they’re traveling.”

With more and more people receiving vaccinations, both Gogol and Burns are optimistic that short-term rentals will bounce back in a big way.

“There’s been a tremendous amount of interest in the 1870 House that has resulted in late spring and summer bookings,” Burns said. “There is definitely a demand for STRs like ours and we’re capitalizing on it.”

“We’re very optimistic about our future,” Gogol said. “People have COVID fatigue. People feel safe coming to a rural area like this.”

DOWAGIAC — Known by many as the place where James Heddon conceived his idea for his world-famous fishing lures in... read more