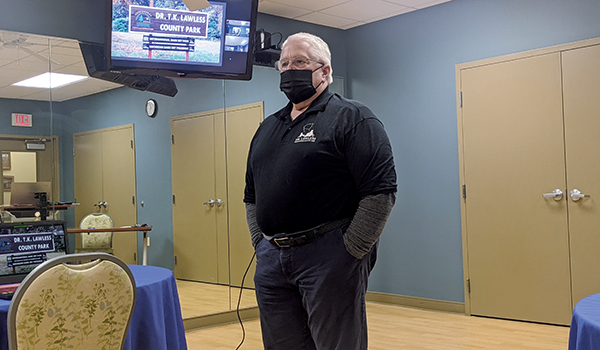 Cass County Parks Board member Robert Parrish was on hand to speak to the club about T.K. Lawless Park, 15122 Monkey Run St., Vandalia, and its International Dark Sky Park designation.

The International Dark-Sky Association works to protect the night skies for present and future generations by educating people about the adverse effects that artificial lighting has on the environment, safety, energy consumption and health.

There are two Dark Sky Parks in Michigan, with T.K. Lawless Park being one and Headlands International Dark Sky Park in Mackinaw City, Michigan the other. According to Parrish, there are also six Dark Sky Preserves in the state, which differ from Dark Sky Parks because dark sky parks are public, typically uninhabited lands that can be of any size, while preserves can be private or public land.

The park’s designation was special for Parrish, who pushed for the designation to honor his late father who inspired his interest in the stars.

“When we received notification that we received certification, I cried like a baby,” he said. “Our park appeared on the IDA web page. I got a call from the lady who tracks the traffic on the web page and she said when we came online, we generated more interest than when the Grand Canyon received certification. That goes to show people are really looking for places to go and it’s a wonderful opportunity for Cass County.”

Parrish also informed the club about the health risks involved with light pollution.

“The American Medical Association has come out with quantitative studies that show that people who are exposed to extended periods of light pollution tend to contract higher cases of breast and prostate cancer,” Parrish said.

According to Parrish, the AMA is also linking light pollution to the body’s ability to produce melatonin, a hormone primarily released by the pineal gland at night, and has long been associated with control of sleep.

“They’re finding out that it has certain cancer-fighting abilities,” he said. “When you get all that light, the body doesn’t know what time it should go to sleep and won’t produce the necessary melatonin.”

Light pollution also affects the world financially. IDA estimates that more than 30 percent of all outdoor lighting in the U.S. alone is wasted, mostly by lights that are not shielded. That adds up to $3.3 billion and the release of 21 million tons of carbon dioxide per year. The U.S. would have to plant 875 million trees in order to offset the amount of carbon dioxide.

Cass County Parks director Scott Wyman was also on hand for the meeting and spoke highly of Parrish’s efforts with the Dark Sky Park.

“He’s not giving himself enough credit,” Wyman said. “We knew Lawless Park was a great park to view the stars. Without Robert, there wouldn’t be a dark sky park or a dark sky preserve. That designation is a point of pride for us.”

The next Dark Sky viewing is May 14 and 15 at the park, which will remain open until 2 a.m.

Vandalia man gets probation for touching women without consent

A Vandalia resident who touched women without their consent received probation and credit for time served Friday in Cass County... read more