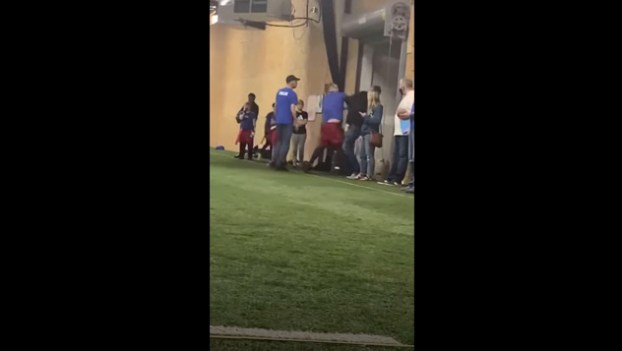 NILES — A YouTube video has surfaced showing a flag football coach sucker punching a parent standing on the sidelines during a recent Midwest Flag Football game at the Midwest Performance Academy on Terminal Road in Niles.

The video shows a coach wearing blue arguing with another coach — visibly angry — during a game. Another coach from the same blue team apparently tried to calm down the situation and lead the coach away from the players and out of the building.

As the angry coach approached the sidelines, a parent, standing with his hands folded across his chest, was punched by the angry coach in blue and dropped immediately to the ground.

Chaos ensued as other spectator worked to get the situation under control. Some are seen attempting to restrain the  angry coach away from the person he punched. The victim of the assault jumped to his feet and seemed to attempt to retaliate.

Andrew Duckett, another leader of the league, posted a statement to his personal Facebook page.

“We would first like to deliver a heartfelt apology to the Midwest Flag Football family for the events that transpired this past weekend,” the statement reads. “David [Garner] and I created this league to provide an opportunity for kids to play and learn the game of football in a save and fun environment. Unfortunately, that environment was compromised by a single individual with the use of violence.

“Actions were taken immediately to remove this individual and calm the situation. I want to make it very clear that actions like this will not be tolerated. This individual has been banned from the property and any association with our name indefinitely. The safety and experience for the kids is, and always will be, our number 1 priority.”