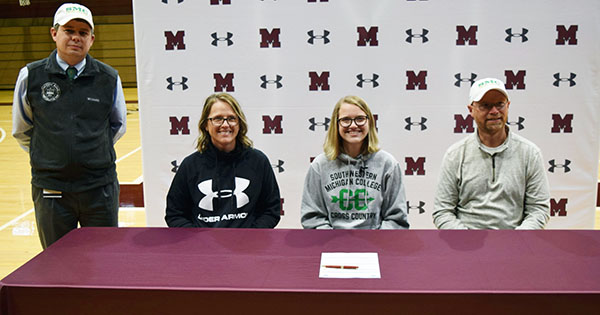 Shambaugh joins Coloma’s Vanessa Crisenbery as the second woman to commit to the Roadrunners for fall 2021, along with men Robert “Buster” Ward, William Westphal and Ben Gillesby, of Cassopolis, Gavin Smith, of Decatur, and Samuel Reed-Loomis, of Otsego.

Shambaugh, who hopes to study nursing at SMC, was flanked at the signing by her mother, Tangula Crawford, and her track and cross-country coach, Chris Kowalewski. City of Mishawaka Superintendent of Schools Wayne Barker and SMC President Dr. Joe Odenwald also attended the ceremony.

She decided between SMC and a larger university in Indiana.

“At the other school, I got to talk to a couple of people,” she said. “When I went to SMC, I was able to meet with almost everybody I would work with to get my college degree. It really opened my eyes to what [the other institution] lacked.”

Another source of information was friends from work who attend SMC.

“They told me a bunch of good things about it, so that kind of sparked my interest once I went for my official tour,” said Shambaugh, who is employed at Sky Zone, the chain of indoor trampoline parks.

“I started track in fifth grade,” she said. “I do both. I started as a sprinter and got into cross country more in high school, when I became a long-distance runner. I like running in general, and I was pretty good at it, kind of fast. I love it. We’re in track season right now, so I’ve been training with that team.”

Her teammates gathered around her in the gymnasium to support her in the signing ceremony.

“When summer comes around, I’ll start to pick up my mileage and do longer distances,” Shambaugh said.

At the Fort Wayne Semi-State, the Cavemen’s 12th trip in the last 14 seasons, Shambaugh ran her personal 5K record, 20:46. Mishawaka advanced to regionals by finishing second to Penn, with Shambaugh named to October’s All-Sectional team.