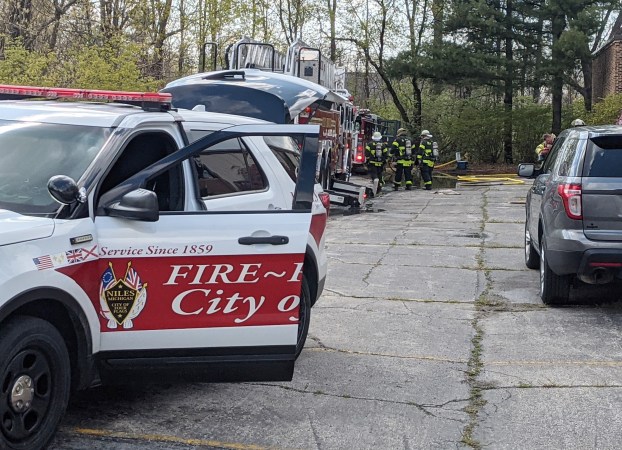 NILES —  A fire inside a vacant building was contained by area fire departments Wednesday with no injuries reported.

The Niles Fire Department was dispatched to the former Niles Inn, 930 11th St., Niles, Wednesday afternoon after reports of a fire. When units arrived on the scene, they were met with heavy flames coming from the back of the building. In less than an hour, the fire had been contained, according to Fire Marshal Rory Iwaniuk.

“Our goal was to contain the fire to one room,” he said. “Our crews were able to knock it down pretty good.”

“Our initial concern was there was more than one fire in the building,” Iwaniuk said. “The fire was contained in one room but there was smoke damage on both sides of the room. There was also smoke down the hallway.”

The Niles Inn permanently closed its doors in 2016. The facility had 85 rooms and banquet facilities that frequently hosted fundraisers, reunions, parties and conferences and has been boarded up to prevent people from trespassing.

“The biggest challenge with vacant buildings is that you don’t know what’s in here or if there’s anybody in here,” Iwaniuk said. “That was one of our main concerns, to get the fire knocked down and start doing searches here. The other thing is, we don’t know what you’re going to run into with these abandoned buildings or what has been brought in. The city tried to keep it boarded up, but like anything else, people are going to find a way in.”

According to Iwaniuk, the fire department will continue its investigation and personnel will be brought in to board up the damaged property.

“We broke a lot of windows and broke some doors,” Iwaniuk said. “We’re going to make sure everything is boarded up properly in order to maintain security of the building the best we can.”