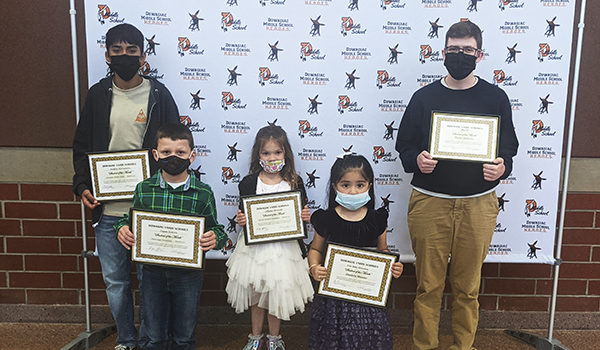 DOWAGIAC — The Dowagiac Union Schools Board of Education honored the district’s March Students of the Month during its meeting Monday night at Dowagiac Middle School.

One student was chosen from each school after a nomination from a staff member. Each student of the month received a framed certificate and a T-shirt with their name printed on it.

Junior Keyan Sullivan was chosen as Dowagiac Union High School’s Student of The Month and was nominated by English teacher Kristyn Turner.

“Keyan has been a daily model of respect, hard work and dedication,” wrote Turner, who was unable to attend but whose message was read by high school principal Kelly Millin. “Keyan excels academically and demonstrates exceptional leadership among his peers. He joined the yearbook staff at the start of his second semester and has been a most welcome addition to the yearbook staff. … He is an exemplary role model for his peers both within the classroom and the school as a whole.”

Dowagiac Middle School eighth grader Andres Hernandez was named the school’s Student of The Month for the month of March. Hernandez was nominated by Spanish teacher Melissa Stanger, who was unable to attend but wrote a letter read by principal Sean Wightman.

“Andres is an exemplary student,” wrote Stanger. “He is always on task, always has his assignments completed and does his best on each assignment. … He is always so positive and helpful and is extremely kind to others and finds ways to make people laugh. He is truly deserving of this.”

Logan Robson earned Student of The Month honors for Justus Gage Elementary and was nominated by his teacher Emily Hudson.

“Logan has worked very, very hard this school year,” Hudson said. “He has very high expectations for himself and he’s always trying his best. If he has questions he doesn’t hesitate to ask. If his teacher forgets something, he is there to remind her. … He did well both in the classroom and at home and said his favorite thing about school is learning and writing time.”

Liliana Mroczek was selected as Student of The Month for Patrick Hamilton Elementary school. According to her teacher, she was chosen “for being a positive role model in the classroom.” She works hard and participates in class, the teacher said. She can often be heard giving out compliments and offering help to her friends. Her favorite thing to do in school is read, especially when she gets to choose books from the library.

Kincheloe kindergartener Julieta Gasca was nominated for Student of The Month by her teacher Melissa McDonald.

“She has worked incredibly hard and has made a huge amount of academic growth since she’s been here,” McDonald said. “She always aims to please adults and peers in her classroom and is an outstanding listener who follows all directions. … When she gets older, she wants to be a first-grade teacher because teachers are smart and they’re good at helping others.

Kindergartener Daniela Huizar was chosen as March’s Student of The Month at Sister Lakes Elementary and was nominated by her teacher, Tara Reinhardt.

“I chose Daniela because of all the growth she’s made in all areas,” she said. “When we started in-person learning, Daniela missed her mom a lot and she was often sad. Today, that’s not the case as she has grown so much that she loves coming to school, now. … She tries her best in all academics and has made great strides with her English. I’m extremely proud of all that she has overcome, and she has not given up.”

DOWAGIAC — A group of high school students was honored Monday for their efforts in the classroom the past four... read more