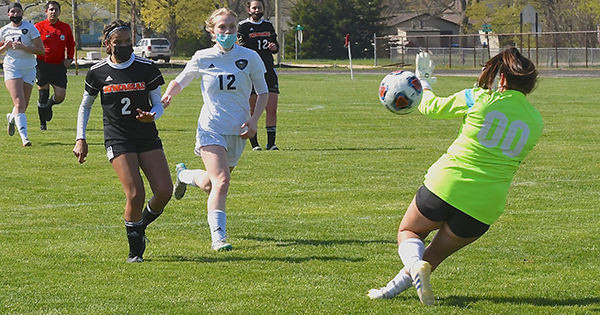 Dowagiac’s Kenya Lee beats the Niles goalkeeper in the Chieftains’ 8-1 win on Saturday over the Vikings. (Leader photo/KELLY SWEENEY)

DOWAGIAC — The Dowagiac girls soccer team remained unbeaten by going 1-0-1 at its own Chieftain Invitational on Saturday.

Dowagiac defeated short-handed Niles 8-1 in the opening match before tying former Wolverine Conference foe South Haven 1-1 in its second match of the day.

Scoring for the Chieftains against the Vikings were LaReina Reina with three goals, Allie Connor with a pair of goals, and Kenya Lee, Laura Schaller and Olivia Ausra with a goal each.

“My hat goes off to the girls today, especially my defense,” said Dowagiac coach Chad Davis. “My backline was very solid and steady. My defense is allowing us to press on offense, so we could have a little more success as a team.”

Reina scored the lone goal for Dowagiac against the Rams to give the Chieftains a 1-0 lead at the time. 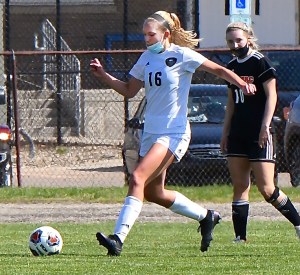 Sydney Skarbek (16) had the lone goal for Niles against Comstock on Monday. (Leader photo/KELLY SWEENEY)

South Haven forced a tie with a goal off a direct free kick with 33 seconds remaining in the match.

“The second game was a very even match with South Haven,” Davis said. “We play very similar styles. Both teams have a lot of speed and spread the ball well. I was proud of the effort that the girls gave today. They kept their composure and their focus and played an all-around solid game.”

On Monday, Niles was defeated by Comstock 4-1 in a BCS Athletic Conference Match.

Sydney Skarbek scored the lone goal for the Vikings.

Renee Franco had six saves for Niles, which is back on the pitch Wednesday when it travels to Buchanan for another conference match. Play is scheduled to begin at 5 p.m.