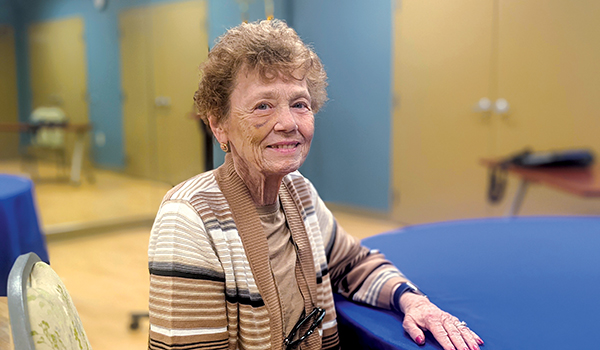 DOWAGIAC — The saying goes, you’re never too old to learn a lesson.

The same can be said for teaching lessons, something Marilu Franks recently discovered.

The ongoing COVID-19 pandemic has impacted every facet of life, with the school districts being no exception. The onset of the virus in schools has impacted the availability of substitute teachers.

Seeing the need for substitute teachers, Franks saw returning to teaching as a way to both help the community and keep herself busy.

“I’m a quilter, so I did a lot of quilting during the pandemic,” Franks said. “But after a while, it kind of got boring. A friend of mine who works at Lewis Cass was telling me how hard it was to get good subs. They couldn’t get subs at all, so I thought why not? They need teachers. I can do it and I have time on my hands so that’s what happened.”

Born and raised in Muskegon, Michigan, Franks taught at all levels while earning her teaching degree but was not offered a job after receiving her degree due to a surplus of teachers at the time.

“They said I had too many years of teaching experience,” she said. “The union wouldn’t let me start at the beginning salary, so I didn’t get a job.”

Franks moved to Dowagiac in 1978 and worked for the employment office as an employment counselor before working 21 years in Benton Harbor in protective services, from which she retired in 2004.

Shortly after retiring, Franks subbed at Lewis Cass ISD from 2004-2006 as a special education teacher.

“A good friend of mine was a supervisor at Lewis Cass at the time,” she said. “They asked me to sub for six weeks because a teacher had maternity leave. Well, she never came back, so I was there for two years. I’m not certified in special education, so they found a teacher that was certified. After that, my mother moved in with us in 2006. That’s when I stopped.”

Franks is currently subbing every day of the week for the district, sometimes moonlighting as a paraprofessional or an aide. While returning to teaching at 80 may seem daunting to some, Franks is enjoying every second she spends in the classroom.

“When I came to Lewis Cass after retiring from the state, I thought to myself ‘I had no idea how much fun this was and how great these kids were’. I would have retired five years earlier. They’re wonderful kids. You get so much gratification and you feel like you’re doing something worthwhile. If I can do it and help the teachers and para-pros out, why not?”

Franks plans on subbing for as long as there’s a need and did not rule out teaching after the pandemic subsides.

“It depends on how I feel,” she said. “I do like to travel, but I anticipate that I’ll do some more of it. I enjoy it, and I feel good when I’m out there doing it.”

DOWAGIAC — Travelers entering the city of Dowagiac from M-62 and M-51 will soon be greeted by a new sign,... read more