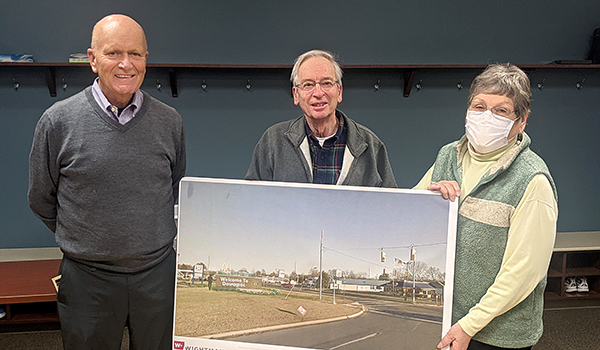 DOWAGIAC — Travelers entering the city of Dowagiac from M-62 and M-51 will soon be greeted by a new sign, thanks to the efforts of the Dowagiac Rotary Club and its Rotary Charitable Foundation.

The Dowagiac City Council voted Monday to also authorize the purchase of Right-of-Way from the Michigan Department of Transportation for $1,800, with the purpose of placing a “Welcome to Dowagiac” sign in the piece of land bordering the intersection of M-51 and M-62 in Dowagiac.

The brick sign will read “Welcome to Dowagiac” and will feature the Rotary club logo and special message bricks purchased by donors.

The project, which has been in the works for roughly three years, was implemented to commemorate the 100-year anniversary of the Dowagiac Rotary Club, which was founded in 1920.

“A year or so in advance of our centennial celebration, we knew we wanted to do something,” said Rotary Charitable Foundation Board member Larry Crandall. “We talked about things that we might do, and ultimately, we came up with an idea of a gift to the community of Dowagiac and that was the sign.”

Approval was granted by both the Rotary club’s board of directors and its charitable foundation board to provide a welcome sign placed on the intersection of M-62 and M-51, considered by many to be the busiest intersection in town. The project was endorsed by Mayor Don Lyons, city manager Kevin Anderson and the Dowagiac City Council.

“The other main entrance into the city is coming in from M-62 from Cassopolis,” said Charitable Foundation Board member Barbara Groner. “It’s got that beautiful statue in the little park as kind of being special to Dowagiac and then by the railroad tracks the city’s got more nice landscaping. This sign is gonna match brick-wise so this will be the entrance from the west side of town, welcoming guests to the
community.”

The club raised the necessary remaining funds through donations and the selling of commemorative bricks that can be purchased by current and past Rotarians, in addition to family members of deceased Rotarians. The organization then engaged the services of engineering firm Wightman for the development of the sign.

As everything began to take shape, the project hit a snag when the club discovered that the plot of land the sign would be placed on is owned by the Michigan Department of Transportation and would have to be purchased from it. After filling out the paperwork, the club waited to hear back from MDOT regarding a price for the land, a wait they would endure for more than a year.

“We didn’t have a choice,” Crandall said. “We looked at other potential options and there just wasn’t anything that could match up with that in terms of visibility.”

Groner thanked Crandall — a former superintendent for Dowagiac Union Schools — for handling the bulk of negotiations between city officials, contractors and the state.

“Without Larry, I don’t know what we would have done,” she said. “Being a past superintendent of schools, he’s been through big programs and projects and knows how to handle them.”

“I’ve dealt with enough contracts, contractors, site managers and so forth other the years,” Crandall said. “I think there are times you kind of wonder if this is this really gonna happen, but you just have to have patience and perseverance, and that’s what we’ve tried to do.”

Paperwork and a check for the property purchase were submitted to the city, which will be handling the transaction with MDOT. Crandall said contractors are lined up and construction is expected to begin as soon as the city receives the property deed from MDOT.

“I think it is an appropriate and lasting legacy to our centennial,” Crandall said. “We really appreciate the support we’ve received from city officials and our club members, past and present. This just wouldn’t have happened without them, and I’m glad we hung in there. It’s going to be a great thing for the community when it’s all said and done.”

DOWAGIAC — A Dowagiac woman will once again be gracing the screens of Americans across the country. Jennifer Quail, who... read more