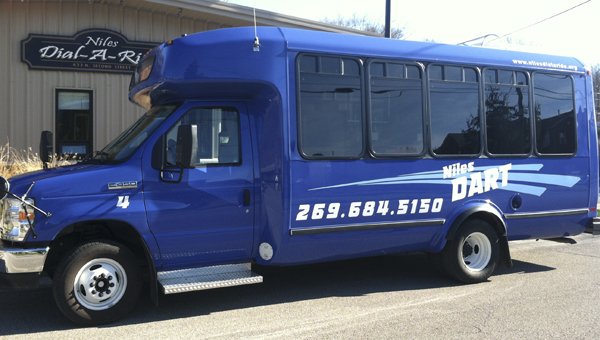 NILES – Running errands, being transported for doctor appointments and more could become more challenging for some Berrien County residents, as county officials reportedly seek to end its Berrien Bus program.

Niles Dial-A-Ride Transportation, or DART, and the city of Niles are in preliminary considerations and discussions with Berrien County concerning expanding its service area.

Huff said the county had approached the city about combining and transferring the transportation services for Niles DART to proceed with for a central area in the south county area, including Buchanan, Niles and Berrien Springs.

“It makes a lot of sense from a rider’s perspective,” Huff said. “There’s a lot of movement between Buchanan and Niles. The continuity of services makes sense.”

Currently, the Niles DART system and Berrien Bus have separate fare systems. Combining the two would streamline the fares for riders.

“We don’t want anyone to lose service, but it’s not sustainable in its current form,” said Kelly Getman-Dissette, Niles DART director, of Berrien Bus, on Wednesday.

Getman-Dissette, who has been with Niles DART since 2009, said discussions have gone on for years on how to improve service in the county and work together across jurisdictions better.
“Berrien Bus has always been the rural provider, but they don’t have local funding,” she said. “They get rural federal dollars. They get some state [funding] match, but without the local funding piece, it’s just not sustainable.”

“We would gear up quickly, working together with the county and working with state and federal partners to put it together as quickly as possible,” Getman-Dissette said.

She said the fiscal year begins in October, for seeking funding and grants. A decision on combining services would ideally need to be reached by that time.

“We don’t want to leave anybody without service that has been relying on the bus,” Getman-Dissette said. “These are folks that rely on bus service to get to work, to get to the doctor, to get to and from the grocery store. We want to make sure folks that are relying on the service now continue to have service to the extent possible.”
Monday night, Huff said the other area the county had approached to take over public transportation was in the St. Joseph, Benton Harbor and Watervliet area.

According to Huff, the county has approached the city with the idea of transferring the capital and cash assets to the city of Niles for buses and to invest in a newly constructed bus transportation facility, repair facility, storage facility and transportation hub in the city.

“These are all positive. I think, initially, in general conversation, it’s the right choice. I think it makes a lot of sense to have this transportation node within these jurisdictions and to help our citizens move about in them,” Huff said. “My concern is, while there’s money to get into this and capital to get into – and maybe a brand new, sparkly facility to get into this – how do we keep it going from that point forward?”

Currently, the city of Niles has a half mill millage, and Buchanan has a one mill millage to generate funds to support the Niles DART and Berrien Bus services. Not all jurisdictions that would fall between areas requiring service would have funding to support It at this time, including Berrien Springs. The Berrien RESA, stationed in Berrien Springs, has contracts with Berrien Bus, which could potentially be transferred in the event of a shift in transportation responsibility.

“There are still things we need to explore legally, but it’s [the city’s] understanding that we can develop a new, small regional transportation that is basically a ‘pay for play’ type system,” Huff said.

Huff said townships and municipalities wanting to use the potential service could set a special assessment district, millage, or pay from general funds a per capita rate to be included in the service area.

“We are all familiar with how curses work, right? You have to pass it on and have someone accept it,” Nelson said. “I think it’s absolutely a critical need. I absolutely wish that Berrien County would be able to make this work in away that would have us have an integrated service across Berrien County.”

She expressed concern about the times transportation would be needed, which would fall into longer hours than Niles DART currently offers. She also mentioned the shortage of bus drivers in the area.

Council member John DiCostanzo said he did not want to enable the county to give up on the Berrien Bus concept.

“I think we need to be tougher than that,” DiCostanzo said. “We are doing a good job serving our constituents. We may end up taking on other transportation responsibilities that impacts the level of service we are providing to our constituents. I don’t know why we would take this on and enable the county to ditch it.”

Huff said over the next 30 to 60 days information would be gathered to present to the council members for “further thought and consideration.”

SOUTHWEST MICHIGAN — As of Wednesday, Berrien County reported 12,489 COVID-19 cases and 240 deaths, according to the Michigan Department... read more